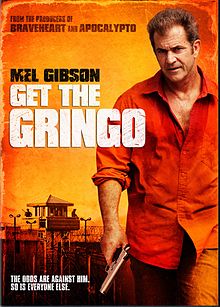 Is there quite anything like a crazy Mel Gibson? I know, I know. He carries it over a little too much into real life, but he makes for a great crazy guy on film too. Whether its something iconic like "Lethal Weapon" or something massively underrated like "Payback", Mel is just a blast to watch when he's a crazy asshole. Which is exactly why "Get The Gringo" is a fantastic watch. It's gritty, quirky, and best of all - it has Mel being a crazy asshole! Perhaps the film isn't for some, as it certainly isn't perfect by any means, but I'm glad to see Gibson back kicking ass and generally being a dick to everyone.

When a robbery goes awry, a driver (Gibson) and his partner find themselves on the other side of the Mexican border, car totaled, and surrounded by cops. The corrupt law enforcement find the load of cash and decide to keep it, but to do so they take the driver and try to bury him in a village like prison. Here the driver works his way through odd society within a society, earning the trust and friendship of a young boy, and plotting to get out and get his money back.

I previously mentioned the underrated "Payback" and in many places "Get The Gringo" certainly follows the foundations laid by that film. This little dark comedy is heavily reliant on Gibson's ability to be charming, relatable, and completely uninterested in the well being of others and then taking that character and throwing him into some completely bat shit crazy situations. In all honesty you can take this character, in this film its the driver, and throw him into any weird situation and the result would be both hilarious and painful...which is where this film succeeds.

Under the rather playful direction of Adrian Grunberg, "Get The Gringo" is allowed to do some pretty ridiculous stuff. Having never been to Mexico, let alone a prison there, the set up is over the top and often a bit silly. The prison works like a small village (or the world's shittiest mall as the Gibson snarlingly refers to it once) and here it allows the driver to do some odd things like raise a little destruction, steal guns and money, barter off cigarettes from a kid, and plan to collapse the hierarchy. It can be a far stretch for the imagination at times, the final act and Gibson's assassination plan come off as pure comedy mixed with some significant violence as he impersonates Clint Eastwood and blows up a building, but if you are willing to go with it - its a fun ride.

Believe it or not, the main character's growth really worked for me. His connection with the boy and his mother never felt forced and came about in a rather natural progression. This combined with the burrowing into the scrum bag hierarchy of the prison, kept me quite intrigued and often on the edge of my seat. A couple of solid action sequences (although I'm not sure anything could top the opening car flip into Mexico, but it does its best with a street shootout old school western style) are thrown in for shits and giggles that makes the combination something of a treat for those buying in.

The film is certainly quirky with its dialogue and characters, seemingly pulling from a modern Guy Ritchie place of thinking, and its balance of humor and gritty crime action comes off as potently put together. Of course the film is hard to swallow once one has time to really think about it and some of its supporting cast is a bit much, but in the end "Get The Gringo" is a ridiculously fun and awkward experience for any fan of Mel's off beat side. Highly recommended.