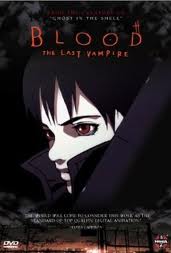 With my last review I took a trip back to high school and now I am doing it again, but further back in time. I orginally watched this DVD 10 years ago back in 2002 and I remember thinking then how awesome it was. Now, I decided to rewatch it to see if it is like I remembered it. So off we go on a very short adventure... 60 minutes to be honest.

The story - Saya, a young woman working for the government, goes undercover as a high school student to battle evil forces. It turns out these evil monsters are posing as humans, but are really vampires. Only Saya has the power to destroy these creatures as she is the last Original. Armed with her katana she sets out to destroy them all. 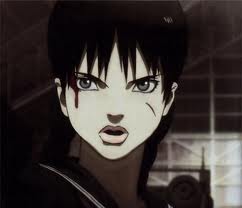 The artwork - Thinking back to when I first saw this film I had fond memories of the artwork. Now after viewing it again, I am not sure what I saw ten years ago. The background is nice with shadowy colors and a horror movie feel to it. The look of most of the human characters is something to be desired. I couldn't believe how ugly the characters looked. They just seemed to have strangely large lips and gaps from eye to eye like small valleys. With that said I think the monsters were well done. Scary looking were-vampires type things, really worked here. The action scenes were very well done. So really other than the characters looking a little strange I think the art looks pretty sweet. 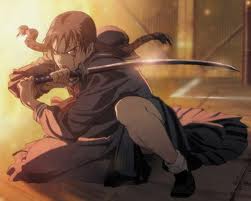 Final Thoughts- There is a lot to this story that we are not given as a viewer. The film is very short and we are left with so much to wonder about. I do know there is a series based on this film and I will set out watch that soon. Overall, this is a pretty decent watch.

Wanna see "Blood: The Last Vampire" or films of a similar nature? Check out John's recommendations below!