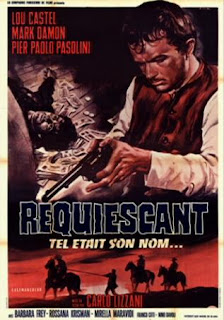 A religious figure that turns to violence? Sounds like a fine spaghetti western concept for me! Actually Kill and Pray is one of the best of the "forgotten" spaghetti westerns I have come across. By "forgotten" I mean not easily obtainable in the home video market and since it is so rare to find not many people have seen the damn thing. Hell, the DVD I have from Wild East Entertainment is even out of print and I recently saw a copy sell for over $140. Yikes! That's a shocker especially since I obtained mine for only $20 three or four years ago.


Our film opens with a slaughter and a young boy is traumatized by the killing of his family and friends. A passing pastor and his family find the boy and take him in. He is raised to be religious and in turn has become a pastor himself. All is well until one day he runs into the man that slaughtered his family and he then becomes tempted to stray from his strict religious life to get revenge!

This isn't the first or last time a film will have a plot that revolves around a religious figure turning violent (hell it's most recently seen in the grand Book of Eli) but despite it's familiar story Kill and Pray (better known overseas as Requiescant) is made very well especially considering its budget. Lots of sharp cinematography and stylistic shots supplied by Carlo Lizzani. I especially dug the final act which takes place in a burning church.

My one complaint of the film would be our lead character portrayed by Lou Casteel. Lou Casteel has never impressed me in any spaghetti western and I found his portrayal of the torn religious gunfighter lacking. I never felt the emotional turmoil the character was feeling as he was tempted into violence. His portrayal gives me a little of a "what-ever" vibe. I however was impressed with Mark Damon's creepy portrayal as our head villain with homosexual undertones. This wouldn't be the first time a villain would have these overtones (see also Django, Kill!) but never before with this subtle creepiness!

If you're a spaghetti western fan then I highly recommend this forgotten classic of the genre. I feel even casual spaghetti western fans will find aspects to like here. Is it worth a $140... well I wouldn't recommend anyone spending that kind of dough on a DVD. It's worth the hunt if you can find it for a reasonable price. It's just a damn shame it isn't more widely available so more fans can discover it.

Update: Good news for fans. Wild East recently re-released "Kill and Pray in a double feature with "Dead Men Don't Count", another fine example of the genre. Pick it up quick before it goes out-of-print again! 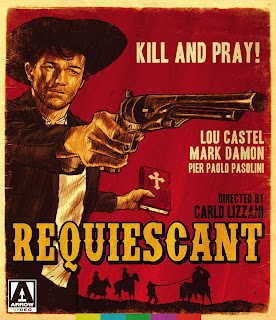 As Eric mentioned in his initial review for Requiescant, aka Kill and Pray, over five years ago, the film has gone on to be something of a spaghetti western holy grail to be found and cherished by fans of the genre. Well, no longer will that be the case. Arrow Video has picked up the "forgotten" western for a new Blu Ray and DVD release that fans will enjoy. The special features are listed below, but just keep in mind that this film is a brand new restoration from the original camera negative and it looks sharp. Unfortunately, Requiescant is not nearly as bulging with bonus features as one would hope. It features one brand new interview with actor Lou Castel and one previously released interview with director Carlo Lizzani. Truthfully, the essay in the booklet is easily the best feature on here outside of the restoration.

My review of the film is remarkably similar to what Eric had to say about the subject, including a hum drum lead performance, striking villains, and some great visuals - although I do have to say that it's subject matter about systematic racism and sexism that our hero must battle against does strum an even more effective chord today, but my review really breaks down into one simple idea. If you are a spaghetti western fan, then Requiescant is the kind of film you are going to want in your collection with its strong themes and numerous memorable sequences and it's this Arrow Video release that is going to get you excited to have it there.