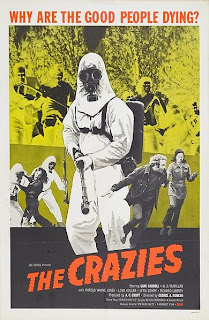 Out of director George Romero's classic horror era (68-85), The Crazies seems to be the most overlooked right after Romero's disappointing Season of the Witch. Even fans of Romero himself tend to overlook this classic low-budget 70's landmark. Thanks to the recent remake however it seems people are finally are starting to rediscover it and actually give it the respect that it's never gotten. Though I usually tend to find remakes completely pointless I do have to give them credit sometimes as they allow a new, younger audience to discover the original, even if the film may be too dated for some.

The Crazies could quit possibly be considered the first of the virus outbreak films that are so common now-a-days and films like 28 Days Later owe The Crazies a debt of gratitude. Out plot centers around two firemen and one of their pregnant girlfriends who is a nurse. One morning they are called out to a burning house which for some unknown reason was started by a once loving father, who burned his family alive inside. Soon military personal show up all outfitted in striking white hazmat suits and all the civilians are all gathered and some even start to get exterminated. It seems a government virus has been accidentally released on the small town and the disease causes it's victims to go stark raving made. Our firefighter duo escape and try to make it out of the quarantine zone while dodging "crazies", the military, and even the dreaded bug itself.

Typical with Romero films there are a lot of underlying meanings here. The difference than compared to Night of the Living Dead is that these themes are laid on a little more thick and not so subtle. The Crazies was made right on the coat tails of the Vietnam War and Romero wrote and filmed his opinion of the government. Yes, in this film the government are the bad guys and the line is blurred on who the worse foe is, the government soldiers or the crazies caused by the bug. Romero also shows the problems with "red tape" with the chain of command trying to get answers from the government. Nobody seems to give a straight answer and all the personal is constantly waiting for instructions.

Considering the budget Romero is still wonderfully captures the chaos and the degradation of humanity in the grip of death. He also is able to capture many iconic images, especially sequences featuring our white suited soldiers. However there tends to be more flaws here than the typical classic Romero film. The first problem is our leading actors. Romero surprisingly isn't able to get great performances from them and due to the lackluster leads I really didn't feel myself rooting for their survival. The characters in Night of the Living Dead and Dawn of the Dead are memorable and the audience truly cares for their well being. Not so much here. The military drum score also tends to grate on the nerves after a while and it is constantly going, and going like the God damn Energizer bunny.

The Crazies is a good film with smart underlying meaning but it still doesn't come off with the staying power of his earlier zombie classics. Perhaps with better characters and actors it would have become as famous as his classic Night of the Living Dead, Martin or Dawn of the Dead. As it is Romero's direction and smart script still makes this a classic horror film worth rediscovering.