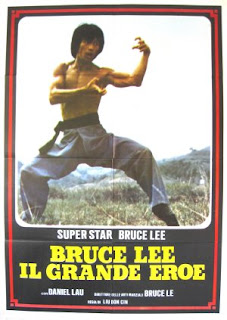 Beyond the unofficial sequels and rip-offs, there's another subgenre of the notorious Bruceploitation genre... and that is the biopic. Yes, The Legend of Bruce Lee is a so-called "biopic" of real life fighter turned-actor Bruce Lee's tragic short life. Considering this is a "Bruceploitation" film we can expect this cheap cash-in to be real fucking accurate to true events. If you can't tell I am being very fucking sarcastic.

The film opens with a woman holding a child while traveling on a barge. We then hear a ridiculous whistle on the soundtrack and a man states something to the effect that the child is special because of the of comet that passed over. The film is so god damn cheap they couldn't even show a cheap optical effect of a comet, they have to resort to a shitty whistle sound? From that moment I knew I was in for another forgettable Bruce Lee cash-in.

The rest of the plot is standard cheap martial arts thrills. We jump to our "Bruce Lee" character as a young adult (played by Bruce Le, and that isn't a typo) and the plot pretty much has him and his school chums get into a fight, Bruce going to his new martial arts teacher, getting another fight, etc. I've seen martial arts films like this a hundred times before and much much better.

This is my first experience with Bruceploitation star Bruce Le as all my previous ventures into the notorious subgenre have been with actor Bruce Li. Fans of this interesting genre tend to think Le is a better martial artist. This may be true but I find that Le lacks the screen presence of Li. Again it's hard to judge this by only one film but as is I would much rather watch a Li vehicle. This film also was just uninteresting and nothing in this film is true to the life of Bruce Lee, despite being a so called "biopic." You want a biopic film that follows true events, then go watch Dragon: The Bruce Lee Story.

Overall all we get is another forgettable, cheaply made martial arts film that's only claim to "fame" is that it's based on the true life of Bruce Lee. Apparently there were a number of these "biopic" Bruceploitation films, some even starring my preferred Bruceploitation star Bruce Li. Maybe it's just me but I prefer my Bruceploitation films to be a little more ridiculous, over-the-top, and in bad taste.