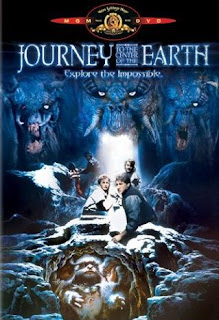 You can't get more of a convoluted mess than Cannon's version of Journey to the Center of the Earth. One would think from the title that this would be an adaption of Jules Verne's classic science fiction novel. HA! Just remember Cannon, though I love them dearly, can fuck any film up! This "version" of the story is actually has an interesting story behind it because believe it or not it is actually two unfinished films clobbered together. Cannon was going through some financial hell in the late 80's and two films that had already started filming got nixed. The first of course was Journey to the Center of the Earth and the second was a sequel to their unfunny bomb Alien From L.A.. Cannon was notorious for making some dumbass business deals and they had already made agreements with foreign distributors for release of Journey to the Center of the Earth. Since they had to fulfill their agreement they decided to cut both of their unfinished films together. As you can tell from the interesting history behind this film the results came out completely incoherent!

The story starts out in England with a Nanny having trouble with her job. She even admits that she isn't "nanny material" though all she "ever wanted to be wanted to be was a nanny." What a sad childhood she must have had when her biggest dream was to become a nanny! She gets sent over to a client in Hawaii to take care of his dog where she, very sloppily written I might add, ends up with a trio of children going into a cave in an active volcano (don't ask how the story ended up here!). While down in the cave we have some awful dream sequences and about 38 minutes into the film, they finally come to the city of Atlantis, which very few viewers will recognize from Cannon's previous disaster Alien From L.A.. This is when the film really gets bizarre for people who don't know the history behind this mess as from this moment on it is a sequel to Alien From L.A. with many characters returning from that film. Apparently the residents of Atlantis are training soldiers to look and act like Kathy Ireland (the heroin from Alien) so they can have a declare war on the top world! And people wonder why this film is so hated!

Like I have mentioned before this film is a MESS. It's two films very sloppily edited together. Cannon showed no mercy as they cut corners around every turn! Cannon even reused music from their other film productions, most notoriously American Ninja 2! They even use footage from The Delta Force. Yes when I think of Jules Verne's Journey to the Center of the Earth I think of DELTA FUCKING FORCE! The film ends abruptly at an hour and ten minutes and the next ten minutes is a montage of footage from the rest of the film which even contains scenes not shown earlier! Cannon even seemed embarrassed by their cut and paste film as their company logo and producer credits aren't even shown!

Being a Cannon film fanatic I only bought this film as a curiosity piece. I knew it's sad story but I had to see what a mess it really was. I can say it lived up its dire reputation. I really feel sorry for people renting or buying this thinking it is an actual Jules Verne adaption only to get a shit sequel to Alien From L.A.! I have a feeling Jules Verne's spirit kills a kitten every time someone pops this "adaption" of his classic story into their DVD player. Yes it's that fucking bad. I even toyed with the idea of giving this zero stars but decided against it as my personal rating system goes from 1 to 5 stars. I'll have to leave that one zero star award for some other film down the road...