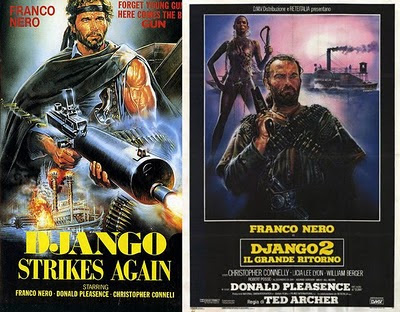 
After 30 unofficial sequels, Franco Nero finally got off his ass to give the fans an OFFICIAL sequel to his 1966 hit Django. The problem is he is over twenty years late! By the time Nero decided to do this sequel original director Sergio Corbucci was too ill to direct and the spaghetti western genre had been long since dead. Because of genre being dead and gone and for the fact Nero looks 20 years older, the filmmakers decided to, wrongly in my humble opinion, to make the storyline take twenty years after the events of Django which in turn makes this film take place after the western age. What! They decide to make an official sequel to Django and it ISN'T EVEN A WESTERN?! All I have to say is this is one of the biggest missed opportunities ever in a Euro Cult film genre. 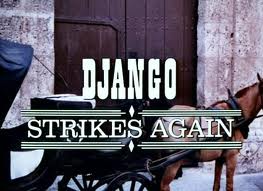 Ok so we have a plot that takes place 20 years after the events of Django and it is no longer the wild west. Django apparently has disavowed his violent ways, burying his machine gun, and has become a monk. That just makes me think of Rambo III and any connection to Rambo III cannot be good! News reaches Nero that a rebel Hungarian soldier (Christopher Connelly) has kidnapped his daughter to work in a bordello (he also kidnaps boys to work in his silver mines) so he decides to dig up his machine gun to go get her back. I forgot to mention that Donald Pleasance is in the film but his character is completely forgettable. 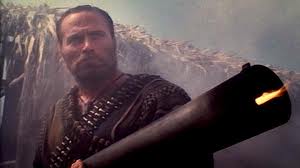 Other than this NOT BEING A WESTERN, another problem is the complete tone shift from the first film. The original Django was a cheesy, trashy B-Western classic that took pride in being just that. New director Nello Rossati decides to take this film seriously and throws away all the cheesy and outrageous sequences of the original. I also didn't dig the new serious, reformed Django character with long slicked back hair. To be honest, even with Nero in the role, it just didn't feel like Django. Christopher Connelly is completely forgettable as our villain and director Rossati also overuses soft lenses, giving the film a white hue that was so prevalent in Italian films in the late 80's. Also... where the hell is the unforgettable Django song? 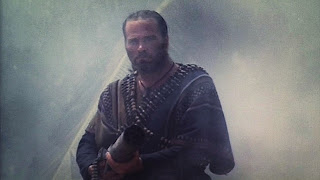 Overall this has to be one of the most disappointing sequels I have ever seen. It by no means is a terrible film but it completely missed a grand opportunity to make a great sequel for the fans that had been patiently waiting over twenty years for Nero to return to the role that made him famous. Twenty years is a long time to wait and the fans were not dished up a sequel that was worth it. Sadly many of the unofficial sequels were actually better. See Django, Kill! and Django the Bastard to see what I mean. Hey those were WESTERNS so right away they have something up on Django Strikes Again. If it weren't' for the connection to the classic Django this would be just another forgettable late 80's Italian action film and with the Django character, it should have been a cult dream come true. Sadly it isn't and is only should only be seen as a curiosity piece for euro cult fanatics.

Own the official sequel "Django Strikes Again" by clicking the link below!