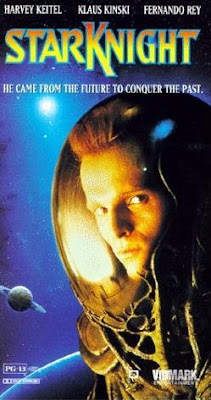 I can admit I didn't expect a good film with the title "Star Knight" but the cast which includes Harvey Keitel and Klaus Kinski always intrigued me. How bad could it be starring these two acting giants? Well if the actors are only in the film for a paycheck then the film can be real, real bad! Star Knight to my surprise is actually a Spanish film that somehow, God only knows, got a theatrical release in America back in 1986. The film however didn't get a VHS release until 1992 and I remember the video box cover always popping in the previously viewed section of every video store I went to. After viewing the DVD (which now has an awful Photoshop cover artwork) I can see why all those video stores were so eager to get rid of their copies!

Our film opens with Kinski, playing an alchemist, praying to have an angel sent down from the skies. Low and behold, a space craft appears and lands in a local lake. Soon animals start being carried off into the sky and the locals believe it to be a dragon! Our bitch princess in the mean time decides to go skinny dipping in the lake and disappears! She reappears with story of a "knight" whom she has fallen in love with. She travels back to the spacecraft to meet him again but jealous knight Harvey Keitel has different plans and challenges our "Star Knight" to a duel for our ladies hand in marriage. The rest is predictable.

To my surprise the worst part of the film is actually Harvey Keitel. I thought he would be the rock holding this disaster together but he actually makes the film..shutter...worse! His acting is beyond awful and spouts his medieval dialogue with what seems like a smirk on his face. Is this because he knows how silly the concept is and only has to hold his laughs back enough to get his paycheck? Kinski on the other hand is acceptable other than his voice is annoyingly dubbed over.

Another problem is our "star knight" who just comes off unintentionally funny with his silly domed helmet. The name of our "star knight " is IX and his portrayed by Miguel Bosé who apparently was a popular singer in Spain at the time. His look reminds me of singer/actor Sting and anything that makes a connection to Sting is never good! His character also only speaks to our princess in high pitched whirl sounds reminiscent of rubbing your finger around the rim of a crystal glass. Believe me this gets really ANNOYING really FAST. Because he doesn't talk his character development between him and the princess is non-existent. Am I really supposed to believe their love for each other is strong enough for him to die for her? Believe me, Starman this isn't! For the life of me I can't figure out why he loves the princess so much as she is a real bitch to him. She's constantly bitching about his helmet and even at one moment scolds him for touching her with that awful armor. Towards the end of the film when Keitel arrives to challenge him, the princess even starts bitching to IX that he needs to prove his love for her by going out and killing Keitel. IX, you need to dump this bitch now! My how love is blind sometimes....

Star Knight tries to mix medieval romance and science fiction and but it falls right on its dome covered face. The character development is none-existent and the audience feels no love connection between our space freak and our bitchy princess. Keitel is awful in his paycheck role and director Fernando Colomo seems unconfident with the material, like he doesn't know if to play it straight or make it more tongue-in-cheek. The result is nothing more than a bore and I still can't believe this film garnered a theatrical release in the States. I have made it a goal that before I die I want to get Harvey Keitel to sign my DVD copy. I have a feeling the look on his face will be priceless!

Bonus Rant (Spoiler): The plot convenience of how Keitel learned how to remove IX's armor suit is the sloppiest writing in the film. When taking Kinski to jail, Keitel finds a crystal orb that when touched, just happens to show a visual image on how to remove IX's suit. Wha...WHAT! Why would IX give Kinski an orb that gives an image on how to remove his suit! The only point is PLOT CONVENIENCE! And when Keitel is able to make IX's suit disappear, it then sudden appears on Keitel in a split second! This makes no fucking sense!