Allan Quatermain And The Lost City Of Gold - 1.5/5 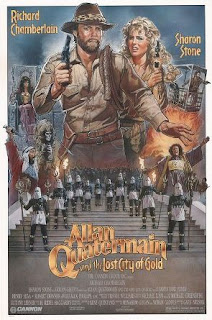 In good Indiana Jones rip-off fashion this sequel to King's Solomon's Mines decides to add our characters name to the title. However just like Indiana Jones and the Temple of Doom was a couple of steps below Raiders of the Lost Ark, this sequel also isn't as good as it's silly predecessor (which is hard to believe considering the original was bad enough in its own right).

Both Richard Chamberlain and Sharon Stone return to their "respectable" roles and now they are happily married. All is fine until Quatermain learns that his adventurer brother has disappeared in Africa while looking for the Lost City of Gold. So he and his wife along with a guide (James Earl Jones, counting his money on the way to the bank) decide to trek across the continent to find him.

The main problem with this sequel is that it really lacks the over-the-top nature of the first film. The original had it's tongue placed firmly in its cheek making the outrageously stupid sequences stomachable. There are still plenty of idiotic sequences to be had her just taken a little more seriously. The absolute most silly sequences include an extremely fake canoe ride into a cave with flaming water and another scene when our heroes have to battle giant worms with what look like dragon heads... no I am not making that up. The film also lacks the brisk pace to the plot making Quatermain meander a bit through his adventure, and the film especially slows down when they arrive at the city of gold.

It helps this sequel that both Chamberlain and Stone return. Without theme this film would have been dead on arrival. Recycling Jerry Goldsmith's rousing adventure score also helps. Fans of B-movie serial adventures might have some fun (I had a little) but Cannon films financial struggle was showing through and this sequel doesn't have near the production value of the original. Overall it's a bad sequel to a bad film, but it still is able to entertain some for the right audience.

Bonus Rant: I read an interview with James Earl Jones that he only took this role because it meant a free trip to Africa. Not surprisingly it shows in his dismal performance and him swinging his overblown staff got me to crack up on occasion.