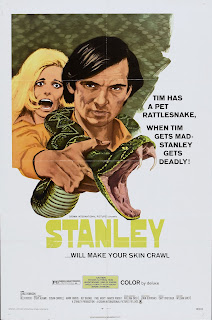 An anti-Vietnam horror film with snakes! Sounds like a hissssterical time to me! Actually considering the concept it is actually played seriously for the most part. This could be a good or bad aspect depending on what type of horror fanatic you are...

Our film revolves around a Native American Vietnam recently back living in the Everglades after his tour of duty. Sadly the war has made him go war wacky and now his only friends seem to be the rattle snakes that live in the swamps. And boy does he love his snakes! He sleeps with them, he eats dinner at the table with them, and he even gives the female ones little flower bows on top of their heads! I'm not kidding... Snakes give this nut a hard on! His prized pet snake is Stanley, hence the name of the film. He is so obsessed with snakes that he goes out of his way to punish anyone who dares harm them. A local businessman (who had our snake freaks father killed) and his goons capture snakes to make belts. Tim and his pet Stanley make sure they never get out of the swamp alive! These goons even hire another psycho Vietnam vet to take Tim out, but when that psycho kills all of Tim's snakes, he finds out how long Stanley's fangs really are! The rest of the plot is basically Tim and Stanley taking out anyone that crosses them.

The silly story really isn't strong enough to warrant a feature film. Perhaps if the filmmakers made the film with their tongue-in-their-cheek it would have been a romp but as is it's taken far too seriously. There's even a ridiculous sequence when Tim has a burial for his dead rattlers complete with small crosses. Am I supposed to take this seriously... really... am I?

Another problem I have is the directing which is just flat and boring. It's point and shoot with no flair behind the camera. The limited plot and boring directing style made this a trying film to watch at some moments. Not to mention the non-existent score, other than some lame early 70's pop songs setting up the wrong mood for the film.

Overall I found Stanley to be a very forgettable drive-in horror drivel. It's got limited plot, boring directing, with no added violence or blood to make up for the other lackluster filmmaking aspects. This film really could have used some over-the-topness to attract a cult crowd! As is it will remain an unfound, forgotten film destined to remain in bargain public domain collections.