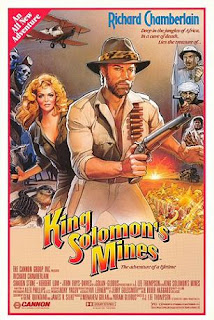 After the release of Raiders of the Lost Ark in 1981 a whole slew of imitators infiltrated theaters throughout the early 80's. Italy was king of the pack with director Antonio Magharatti releasing many of his own visions of the Indiana Jones adventure. Not all Indiana Jones rip-offs came from Italy however and there were many home-grown right here in the United States. The best known and perhaps most shameless of these Indiana Jones rip-offs is Cannon films adaption of King Solomon's Mines.

If you're expecting a faithful adaption of the classic story... DON'T. Cannon takes the basic premise of the story but converts it into a complete Indiana Jones rip-off molding the hero of the story Allan Quatermain into an almost direct clone. Almost everything in this film is a direct steal from the first two Indiana Jones films, including dialogue and action sequences. Hell the writers even had the gale to have Quatermain say the line "Trust Me".

Our film opens with an archeologist being tortured by a crazed Nazi (Herbert Lom) and his henchman (John Ryes Davies, shamelessly cashing in on his own role from Raiders of the Lost Ark) to find out the whereabouts of King Solomon's Mines. When his daughter (Sharon Stone) loses contact with him, she hires adventurer Allan Quatermain to lead her into the African Jungles to find him. Typical with adventure films, lots of action and high jinx ensue as our duo fight Nazis in a plane, on a train, and even get captured by a cannibal tribe. The film wraps up with a fight in a cave of a live volcano

Thankfully our stars and director know their making an Indiana Jones rip-off so their tongue is firmly pressed in their cheek. Our hero is even introduced by telling our damsel "Be careful, it's a jungle out there." Richard Chamberlain and Sharon Stone seem to be having a ball by not taking such harmless and silly entertainment seriously. The film is also made watchable with its great Jerry Goldsmith score and furious pace. Still even with its sense of fun there are too many God damn stupid moments to make this a great adventure film. The stupidest moments include our heroes getting tossed in a HUGE soup bowl by our cannibals and a scene where our heroes meet a tribe that live in trees upside down because "they are unhappy with the world." The giant fake spider at the end takes the cake as the most shitty thing in the film. Mix all this with some awful special effects and you have an adventure film that will only appeal to a certain percentage of the audience that doesn't mind a little cheese and silliness in their adventures.

Most would agree that this is bad film. Just because it's bad doesn't mean it isn't entertaining and in the right state of mind one could have fun with it. I had a ball, even with all the stupidity. It's got a great sense of adventure and lavish production values. Hey, not all adventure films can be as good as Indiana Jones! For people who actually did enjoy this, good news, there's a sequel entitled Allan Quatermain and the Lost City of Gold.