Bruce Lee Fights Back From The Grave - 1/5 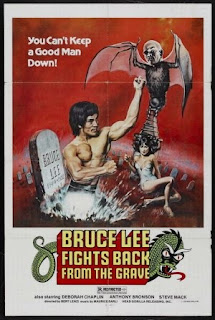 Man what a fucking disappointment! Look at that title and poster artwork... can you get more cheesy, ridiculous and more in bad taste? I think not! I also love how the poster artwork is a complete rip-off of the album artwork for Meat Loaf's Bat Out of Hell. From this title and poster artwork I was expecting the mother of all Bruceploitation movies! The summery on the back of the box art even promised the Bruce Lee's friend has to fight the "black angel of death" in order for Bruce to rise from his grave! All this gave me hope I was going into one of the most entertaining B-films of all time... sadly the title and box art lies making this one pissed off cult movie fanatic.

The film opens promisingly enough with Bruce Lee's gravestone getting hit with a lightning bolt and Bruce jumping out of his 6' foot resting place, but that's the extent of "Bruce Lee" in the film. This opening has nothing to do with the rest of the film! The plot is just more forgettable revenge exposition. This time we have actor Bruce Lea (God I love these martial artists stage names!) traveling to Los Angeles only to find one of his friends has been killed. After his funeral he sets out to find his friends killers and finds a love interest along the way. This plot device has been used in what seems to be thousands of martial arts movies, and far better executed. One aspect I did find hilarious and unintentionally funny is that throughout most of the first act of the film, Bruce Lea wears a sheet around his neck hold a box of his friends remains. The kicker is the front of the box contains a picture of his friend! Lea walking around L.A. in this ridiculous get-up had me on the floor laughing! The rest of the film is typical poor filmmaking at its worst, surprisingly including poorly choreographed fights! If your making a Bruceploitation film the filmmakers at least should have the decency to include good choreographed fights!

This Bruceploitation gem is well known in the interesting subgenre but that's mostly due to its title and poster artwork. Trust me, this isn't nearly the cheesy "goodness" those two aspects promise! It may not be the worst Bruceploitation film ever made, but it is definitely bottom drawer material.

Bonus Rant: This film remains in public domain hell so there are shit tons of varying quality DVDs available. In my research I found the Echo Bridge Entertainment disc to be the "best quality" so that is the version I decided to purchase. It's also a company I tend to trust when it comes to cult films like Bruceploitation films. Sadly their DVD also royally sucks. First of all it's a direct transfer from a poor VHS copy (VHS blips show up every once in a while). That I can actually live with as I don't expect great picture quality when it comes to Bruceploitation trash. The part that bugs the shit out of me with this DVD is that the film is in the wrong aspect ratio! The film is in "full screen" but the image shows up squished making everyone look tall. Changing my picture on my TV to widescreen helps a little but it still isn't right. God I fucking hate DVD companies and their treatment for these trash martial arts films! I might as well paid less for a shittier DVD as no doubt all the different DVDs have the exact same shitty transfer with the wrong picture ratio!