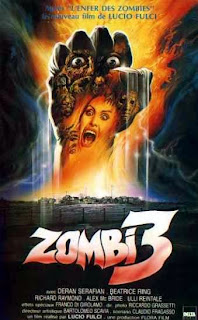 
When I was younger there was no other horror picture I wanted to see more than Zombi 3. Being a fan of Lucio Fulci's Zombie (aka Zombi 2), I was willing to do about anything to see his follow-up to his walking dead classic. I even was one step away from buying a bootleg VHS copy. Please keep in mind that this was before the film had any American video release and was mostly unseen by horror film fanatics. When news hit that company Shriek Show was going to give this long unseen sequel it's American debut video release on DVD, I became ecstatic and quickly bought the film before reading any reviews. As you can tell from my rating I came out watching the film in absolute shock at its horridness. 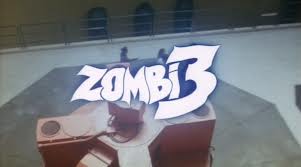 To put it kindly Zombi 3 is a complete disaster plagued by numerous production problems. The first problem is director Lucio Fulci left the picture before the film was completed for unknown reasons. Some sources say he left due to health problems and others say he was just upset on the outcome of the picture. After his departure notoriously bad director Bruno Mattei was brought in to finish the film. I don't see the logic in this. You don't salvage a bad movie by hiring a director notorious for making even shittier movies. Though sources say different amounts it seems that about 70% is Fulci material and about 30% is Mattei footage but to be completely honest I can't tell what footage belongs to which director. The film is just a mish mash of shit that it just all blends together. 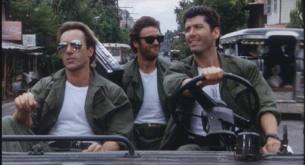 Despite the title this film has NOTHING to do with Fulci's classic Zombie. The plot has a group of thieves who attempt to steal a zombie virus from a military base in the Philippines. One of the thieves breaks a vile while escaping and infects himself with the virus. He ends up being caught not without spreading the infection in the process. In very "Return of the Living Dead" fashion the military burns his remains and the infected smoke infects resident birds and the birds end up spreading the contagion all over the island and the military (sporting white hazmat suits that is no doubt a reference to Romero's The Crazies) goes around killing everyone in sight. 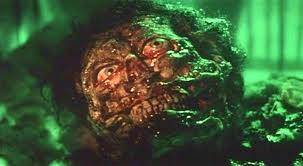 The main problem with the film is it's so damn inconsistent. Sometimes the zombies run, sometimes they shamble. Sometimes the zombies are killed by a minor fall and other times it takes nothing less than incineration to bring them down. Also some zombies even talk, like they still retain intelligence and others just seem mindless. Is this a result of two different directors? Considering the shittiness of the rest of the film I think not. The characters are just awful and cliché not to mention the dialogue. Fans of bad cinema will have an absolute hay day with making fun of this release. 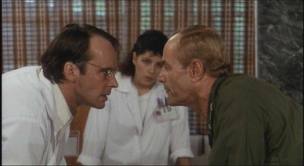 Though a terrible film I still have to say it is extremely entertaining, just for all the wrong reasons. I actually find myself watching this film quite often just for the simple fact it is just so damn unintentionally funny. There are many sequences that will make one's jaw hit the floor from amusement, the best sequence being a zombie head literally flying out of a refrigerator across the room to bite some guy in the throat. How the hell the head get in the fridge? Did a zombie put it there just knowing some people would come through to open it? Another sequence has a zombie baby pull a women's head into a stomach. And you thought Dead Alive or the Dawn of the Dead remake and the first zombie baby! 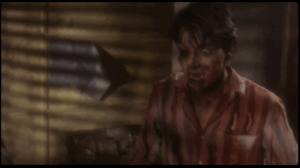 Today the secret is out... Zombi 3 sucks. Back in the days before DVD it was one of the most sought after horror films for Italian horror fanatics in the states. It still is an interesting curiosity piece for fans but it's hardly a true Lucio Fulci film and its now more appealing to fans of unintentionally funny bad cinema. Despite this being horrid I actually find it has more re-watchability than a majority of Fulci's later 80's material. That my friend is a very sad statement. 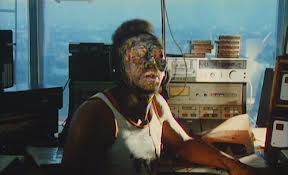 I do have to mention that it is confusing to many people that Zombi 3 got it's American video release with its original Italian title. Some people, not knowing the history of the series, were going "where is Zombi 1 and 2?" DVD companies have recently released the Italian cut of Dawn of the Dead with its Italian title Zombi and Shriek Show themselves even released an edition of Lucio Fulci's Zombie with its original title Zombi 2. Shriek Show also released some films entitled "Zombie 4: After Death" and "Zombie 5: Killing Birds" but this was just deceptive advertising on their part as technically there is only 3 entries into the Italian "Zombi" franchise. To make matters even more confusing there are numerous other films that were released as "Zombie 3" throughout the world, most notoriously the film Burial Ground. Don't be confused though as this is the true, the only Zombi 3. Make no mistake about it!