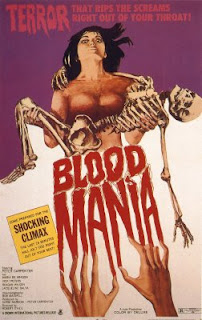 These are the days of our lives... with BLOOD! From the silly title I was expecting some over-the-top gore film in the vein of Herschell Gordon Lewis's blood drenched films of the sixties but instead got a bloody soap opera, literally! Blood Mania came out better and more engrossing than the title would suggest.

What we have here is a nymphomaniac who lives with her dying, verbally abusive bed ridden father. She has a huge crush on her father's doctor... a doctor with a shady past. It looks like the doctor did some illegal abortions in the past for some quick cash and his old business partner is black mailing him for 50,000 dollars. The doctor, desperate for money, decides to start having sex with his patients nymphomaniac daughter as she promises him the money. Her plan is kill off her father for his inheritance. All goes well for the scheming couple until her younger sister shows up and inherits all the money. Our lovable doctor decides to put the charm onto her instead and our nympho goes totally bonkers. A blood bath ensues.

Like I said before, this is a blood drenched soap opera with enough drama to keep any woman happy... that is if they aren't offended by kinky sex, nudity, and blood. Fans of early sleazy seventies cinema with plenty of skin will find some enjoyment as about everyone in the film has a nude scene. There's even a psychedelic drug high sex sequence with some odd camera effects. Director Robert Vincent O'Neill gives us some interesting camera work but some of his stylistic shots were questionable. He even went so far to have an entire conversation filmed from the waist down. Not sure I would used that approach but oh well. The funky seventies score can also be a little grading at times but not enough to make me want to cover my ears.

Blood Mania is definitely not for all tastes and it seems many horror fans actually dislike it. I believe this is due to the soap opera plot but strangely enough I found myself engrossed in it. If the plot is not to some peoples liking then there is enough skin, sleaze and bloody violence to appease people looking for a horror film that is a little different than the norm. Speaking of sleazy director Robert Vincent O'Neill would directing the notoriously sleazy 80's cult favorite Angel, a film that today remains very popular with the cult film crowd.