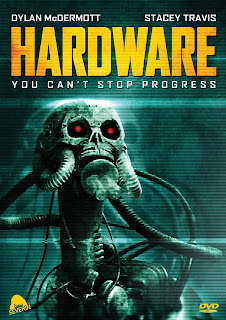 The trailers and advertisements for Hardware made it look like The Terminator meets The Road Warriors. Since this seemed to be a mishmash of two of my most favorite films I for years wanted to see it but just never got around to it. Now thanks to Severin Entertainment for releasing this rarely seen British sci fi / horror hybrid I was able to finally see what this cult classic was about. It does have a killer robot and it is a post apocalyptic film, but those concepts are really the only thing this film has with Terminator and Road Warrior. I can honestly say now after viewing the picture that Hardware is a prime example of style over substance. Does that make it bad? Oh hell no as I did enjoy the picture but it just made me crave more than the plot had to offer.

The film opens with a atmospheric shot of a goggled man walking across a post nuke world where he discovers a half buried robot. He picks up the parts and heads to a town where he sells the parts to government worker Dylan McDermott who buys it for his girlfriend (the gorgeous Stacey Travis) who happens to make artwork with junk metal and electronic parts for rich assholes. We find out later that the parts belong to a prototype of a M.A.R.K. 13, a killer robot that later comes back to life going after Stacey Travis in her apartment. Murder and Mayhem ensue.

As you can tell there isn't much plot to this film. It's a post apocalyptic film about a killer robot chasing a women in her apartment. The aspect that makes up for this insanely simple plot is the eye catching directing talent of Richard Stanley. This film just looks beautiful! The whole time I kept thinking the film had a Dario Argento / Mario Bava vibe to it with its vibrant and lush colors and low and behold the director even admits it in the documentary on the disc. Being a Bava / Argento fan it comes to no surprise I love the style of this film! His great visual style made me crave more out of his screenplay. His simple screenplay seems to throw in all the cliché elements: anti-hero, sidekick, beautiful babe in distress, shower sequence, sex scene, drug hallucinations, and bloody kills. The addition of the creepy voyeur neighbor was a nice touch but otherwise the plot was by-the-numbers. I also did not care for Dylan McDermott's character. Post Apoc films usually have anti-heroes, morally complex characters I love, but his character was just a complete arrogant ass and I never found myself rooting for him to save his woman. Stacey Travis, on the other hand, impressed me for essentially being a novice actress.

So is Hardware the best sci fi/horror film you never seen? Well no but it is an interesting one with some wonderful stylistic directing that is sadly silted by a familiar script. Mix that with some a catchy score by notable Italian film musician Simon Boswell and you having an interesting little post nuke film put nothing groundbreaking. Fans need to keep an eye out for a cameo from Motorhead's front man Lemmy as a taxi driver and Iggy Pop voicing a radio DJ.