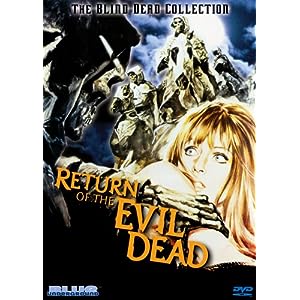 People that don't know the horror genre that well, especially foreign horror films, might at think from the title that this film is some sort of sequel in Sam Raimi's Evil Dead series. The Return of the Evil Dead was actually made nine years before Raimi's bloody classic The Evil Dead and is actually a sequel to the atmospheric euro shocker Tombs of the Blind Dead. Typical with the Blind Dead franchise one can't tell they are sequels by title alone. God forbid the distributors use the term "blind dead" in all of the titles! Anchor Bay Entertainment even changed the title to "Return of the Blind Dead" on their original VHS and DVD release to help people know it was a sequel.

Despite being a sequel to Tombs of the Blind Dead, Return of the Evil Dead does not have any plot carryover from the first film. If you try to make one you'll find yourself having a brain hemorrhage over the continuity errors. What we have here is just another tale, or take on the blind dead. This aspect would carry over throughout the rest of the sequels (The Ghost Galleon, Night of the Sea Gulls) which basically takes our blind dead characters and puts them into another plot and location with no story carry over. This sequel opens with our evil knights having their eyes burned out by an angry mob and then burned at the stake (as opposed to hung and having their eyes gouged out by crows in the last film). Jump forward to centuries later where the very same town which the mob was from is celebrating the centennial killing of the Templar Knights. Now depending if you're watching the edited American version or the uncut Spanish version, the knights return from their graves for different reasons. In the American edit it is just assumed that the Templar Knights rise because of the celebration of their burning. In the uncut version we have a shady little weirdo (typical of Amando De Ossorio films) sacrifice a women which in turns raises them up. In the mean time we have the girlfriend of the mayor running into an old flame who is working as a fireworks organizer. Sparks fly between them (no pun intended) and the Mayor decides to have his goons beet the shit out of him, that is until he gets bigger problems when our galloping cadavers come calling and start killing everyone in the village. The climax has a few survivors holding up in a church trying to wait out the undead.

One point in this sequel that outdoes Tombs of the Blind Dead is the pace and editing, which is much more fast and smooth. Other than that the plot is typical "zombies rise from the grave" stuff and the third act is nothing more than a variation of Night of the Living Dead with survivors holding up in a building. I also still prefer the look of the hot, sun blasted grassland of the original as opposed to the greener, lusher look of the village here. That look and overall atmosphere was just better. I also was a little upset on the use of stock footage from the original. It isn't a lot of stock footage but all the scenes of the blind dead rising from their tombs is all recycled from the original film. I understand it's cheaper for the filmmakers to reuse footage but to me it just comes off as cheap, like the filmmakers lacked some ambition.

Overall this isn't a bad follow-up at all and is easily the best sequel in the Blind Dead franchise. Gore hounds may find there to be a lack of blood but euro-cult fanatics that like atmosphere and a little exploitation will eat this one up. The DVD release of this from Blue-underground entertainment, like Tombs of the Blind Dead, includes both the edited American version and the uncut Spanish version (which is only subtitled). The edited version comes from a superior print source and looks far better than the uncut version. So you have to pick your poison... the true version of the film or the better quality version.

Written By Eric Reifschneider
Posted by DarkReif at 10:17 PM