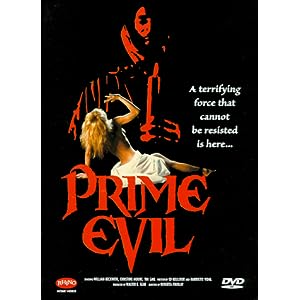 I must be a masochist. There's no other explanation for it. I went into Prime Evil well knowing it was from the same director of Tenement but did that stop me? Hell no! I forged on see what other abominations that horrendous director could unleash upon this world. Hell she could only get better right? Tenement was only a learning experience right? Oh hell no and Roberta Findlay outdoes herself here making a film even more retched than the shitstorm that was Tenement.

After a cheesy opening title sequence with a bad puppet of a Satan looking figure in the background, we are then introduced to a monk who informs his other monk brotherin that he has now become a Satanist and in turn starts decapitating them. I will admit at first I thought I might be going into a B horror picture that might have some great unintentional enjoyment. Then I remembered that this was a Roberta Findlay film and of course she knows how to make any cheesy plot absolutely joyless. Flash-forward to "present day" (though it looks like 1988 to me) and we are introduced to a young woman and her professor boyfriend. The young woman is going to meet up with her grandfather whom has plans to sacrifice her to the devil in order to gain 13 more years of agelessness. It seems her grandfather is in a satanic cult run by the monk from the beginning and the boyfriend catches on. Soon murders begin to occur, the police get involved and blah blah blah... you can guess the rest. There is also a sidestory of a nun going undercover into the Satanic coven except that sidestory goes absolutely nowhere!

To be completely honest the film could have been watchable with good acting and a visualistic director who could give the film some atmosphere. As it is Roberta Findlay makes this film a chore to sit through. She can't direct actors to save her soul! The acting is atrocious with some of the most god awful dialogue ever to be put to celluloid. Take this for example: a cop confronts our Satanic priest and retorts "cut the crap fart breath." Cut the crap fart breath? Am I supposed to take this seriously? Director Roberta Findlay sure thinks so and plays this film off as serious crap. God her directing is just horrid! She sure knows how to bring her Porno directing talent to the legitimate film side of Hollywood by making this the most flat, uninteresting looking film this side of, well, Tenement.

Unless you're a masochist then I recommend just flushing this shit down the toilet. There is nothing, absolutely nothing to recommend about this film. Everything is bottom of the barrel material. Even fans who don't need plot and looking for nudity and gore are going to be bored to tears. Skip it and let this film burn in hell where it belongs!

Bonus Rant: What was up with the awful narration at the beginning of the film? It completely feels like it was added in as an afterthought and it even overlaps with "important" dialogue. Was this an attempt by the filmakers to make the film's background story more understandable for the audience? My guess is yes as the script and directing sure don't!

Written By Eric Reifschneider
Posted by DarkReif at 10:09 PM