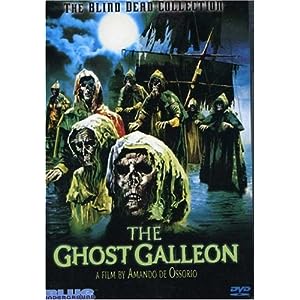 Ahoy mates! The blind dead hit the high seas in this third entry into Amando De Ossorio's Blind Dead tetralogy. The concept of our skeletal blind dead figures on a rickety ghostly ship excited me at first. I got images of Edgar's Allen Poe's M.S. in a Bottle and John Carpenter's The Fog in my mind. I grew up and still to this day enjoy ghost ship stories. I also enjoyed the first two blind dead films so the logical equation Ghost Ship + Blind Dead = Good should apply. Sadly not and The Ghost Galleon (aka Horror of the Zombies) comes off being the most shoddily made and easily the worst of the entire Blind Dead saga

Our plot opens with a roommate of a model showing up at her roommates place of work demanding to know where she is as she seems to have disappeared. Her boss refused to talk until the bitchy blond roommate threatens to go the police. The boss agrees and takes our blond bitch to a remote ship yard to meet some asshole who tells her that her roommate and another model are doing a publicity stunt. What the publicity stunt entails it doesn't go into detail with but it moronically includes two models on a small motorboat in the middle of the ocean. What kind of plot point is this? Our models sudden become surrounded by fog and a ghost galleon appears. They of course board and become blood meals for our blind foes. Our "heroes" (heroes are in quotes because every character in this film is completely despicable) set out on a boat to search for them. They of course come across the ghost galleon themselves and come face to face with the blind dead!

The only thing that makes this film somewhat watchable is the blind dead still have a frightening, creepy image especially aboard a creaky ghost galleon. However the rest of the film is completely moronic. The plot point of having models doing a publicity stunt in the middle of the ocean is to serve no other reason than to get babes in bathing suits aboard the galleon. In typical Ossorio fashion there is also a completely pointless rape sequence that serves nothing to the plot other than to just be exploitive. Ossorio also decides to not offer the audience a flashback sequence showing how our blind dead were created. This would have been especially helpful as no information is given why the blind dead are on a galleon! On the plus side however there is no stock footage from the original Tombs of the Blind Dead. The film is also plum full of horrible miniature effects. The worst thing about these poor model effect shots is that they were not needed. If Ossorio used clever filmmaking and editing he could have done away with shitty model boats and just worked around them. These effects are so bad that they make the model effects in Beyond the Door III/Amok Train look decent in comparison and they induce complete laughter, totally killing any suspense or scares the film was building up. The filmmaking itself is also far below par complete with poor editing and production values. Ossorio sadly isn't able to assemble any true suspense and he seems to be asleep behind the camera as well.

This is a truly awful sequel to what started out to be an interesting series of films. It's a real shame because it had a really cool, creepy concept but Ossorio doesn't seem to know how to flesh it out to be an interesting horror film. His poor plotting, slow pace, sloppy editing, bad effects and shitty characters makes this film more of a target for the B-movie crowd looking for a film to make fun of instead of a euro-horror crowd looking for some atmospheric suspense and scares. Suprisingly this entry didn't kill off the series and our eyeless stalkers return one more time in The Night of the Sea Gulls.

Written By Eric Reifschneider
Posted by DarkReif at 10:24 PM