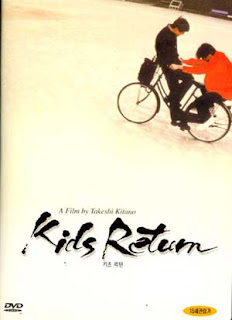 Kids Return is one of the few Kitano films I had left to see. It was very good, but is probably not enough of a stand-out from his more iconic filmography. It shouldn't be missed though, and hopefully that doesn't steer anyone away. I loved it, and I will see it again and again (as I have with most of his works). It's a pretty bleak movie, but has little bursts of humor to even things out. Plus, it's one of the better films about boxing I've seen; in fact, I'd say it's one of my favorite boxing films.

I really like the chemistry between the two lead actors and their friendships and where the story takes them throughout their young adult lives. Kitano's eye was spot on here; I really enjoyed the cinematography, and a lot of the camera movements were well crafted. I got the pleasure to see the recently restored Japanese Blu-Ray of this film, and it looks fantastic, so I must admit I am not sure of the quality of previously released versions of the film. It had this nice blue tint to the film without it being the amateurish blue filter look that plagues many a movie even to this day.

This film also is the only film of Kitano's I've seen aside from Dolls that doesn't feature him in the film at all—not even in cameo form. I will say I didn't even find myself keeping an eye out for him, which is a compliment, cause I sort of feared him being solely behind the camera. I don't know, maybe something didn't feel right about it. That being said, maybe it sounds weird, but I thought it was nice to see him just focus on the film itself from behind the scenes. I think it's a pretty mature film and well-crafted, and may even be in my top five Kitano films, though I can't quite say, as I don't feel like taking the time to.

Also, since this is a review after all, I should probably mention the plot (which I sort of hinted at above). Essentially, two best friends are bumbling lowlife idiots trekking their ways through school, being social assholes, and picking on innocent students. Gangsters in the making, essentially. Well, without spoiling too much, they both end up parting ways from the school system. Their relationship with one another has a nice arc to it and I really don't want to delve into that too much as I think films are better experienced when the audience knows as little as possible going in.


Little side note of a complaint (from not my own perspective, if that's possible). I think the relationship attempted to form with the woman in the restaurant that serves our leading guy doesn't quite go anywhere, and I could see that leaving people to desire more out of that element of the story, but I think it works. Sort of an interest that just dies, much like in life. Maybe this wasn't worth mentioning, but there... I did, so have at it.

For final words, I'd say see it. If you are reading this, you probably enjoy Takeshi Kitano as a filmmaker, or you may have seen the new iteration of the series, Kids Return: The Reunion (though I doubt that), and you are wondering where it all started. Whatever the reason, you are here, and curious, and I again say, go for it. It's one of Kitano's strongest films, though he almost has no flukes, and it should be sought out by anyone looking for a more contemporary Japanese classic. It's a boxing film, by Beat himself. What's there not to like?