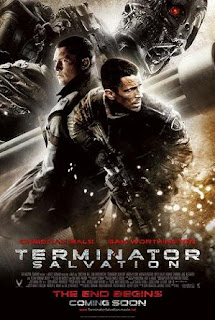 With Terminator: Genisys just on the horizon, I went back and revisited the entire franchise. From its dark and gritty roots in 1984’s launching pad to the focus of this review, Terminator Salvation, the franchise does some intriguing spins. Some work and, in the case of the fourth film, some don’t. Granted, Salvation is hardly the stain on the franchise that so many fans claim it to be (I sure as hell think it’s better than the regurgitated third film), but the film’s attempt to truly reboot the series as a film with different tone and different approach hardly fit with what fans wanted…and it doesn’t help that it’s a fairly wishy washy film on top of that.

It’s now past the nuclear apocalypse and the human resistance against the machine horde is starting to formulate a strong strategy to win the war. John Connor (Bale) is a divisive figure in the group as many believe him to be the savior he is destined to be, but the military ranks are a little harder to convince. When a man (Worthington) awakes in a secret bunker after a Resistance strike, he befriends a young Kyle Reese (Yelchin) and starts on a path that will cross in front of the intense Connor. Do their destinies intertwine to bring down the machines?

If anything, the biggest problem that Salvation runs head first into is the simple fact that it is far too ambitious. Judging from the massive amount of characters that pop up and the leap into a new timeline for the franchise, it’s obvious that Salvation was destined to be the kick off for a new trilogy that would tell the story of Connor’s rise to power and eventual victory over the machines. It’s this ambition that moves the film away from being a straight up actioner and further into the science fiction realm that has a war film feel. While fans revolted against this change of tone, quite frankly the film comes off as refreshing and new instead of the rehashed formula that was running stupid thin in Rise of the Machines. There is a sense of looming destiny in the film and the grungy feel (despite a more modern look) really works as a tone for what the film is. Bale tends to be a bit too one toned to be the iconic leader we had seen in previous entries (I’m guessing this was intentional as we are supposed to see his arc cover multiple films), but there is a lot of great things from the acting in other roles that work to build this aura.

Unfortunately, due to this intent to be a much larger universe – that would never come to fruition – the film tends to be wonky with its structure. It adds in characters haphazardly (Moon Bloodgood’s character shows up half way through for some unnecessary nudity and as a plot progression point) and the duel story line of Bale and Worthington tends to be far more drawn out then it needed to be. By the time they finally meet at the end of the second act, it feels like a relief instead of the tension that was intended by the script and director in the first of a few twists. Not to give too much away (even if the movie has come out over a half decade ago), but the twist is a bit too silly and only gets sillier as the film goes on. Terminator Salvation goes for epic with its tale of man and machine and often it feels like it tries too hard to make it work.

Action wise, McG actually holds his own. The style is far more modern than the previous three and occasionally feels a bit forced because they didn’t want to bore their audience with so much plot and story progressions. Specifically the giant machine that just happens to sneak up on the resistance group about half way through the film that feels like it didn’t need to be there at all, but a lot of it works. The finale is a fun spin on the industrial plant final acts of the first two films. Once again, fans tend to hate the action in this film for being too modern (and often too much like a war based science fiction film instead of classic action set ups), but Salvation is meant to change that tone so it didn’t seem as out of place to me as it did to others.

All in all, Terminator Salvation is indeed one of the weaker entries of the franchise, but that is also because of how damn good the first two are. It’s a change of pace and a change of tone, which is a good reason for fans to be angry I suppose as it doesn’t really feel like the three Terminator films that came prior, but it’s still a step up over the redundancy of the third film. So as the fifth entry Genisys arrives this coming week, remember Salvation and how you reacted to it…and you’ll understand why this latest entry is the way it is.