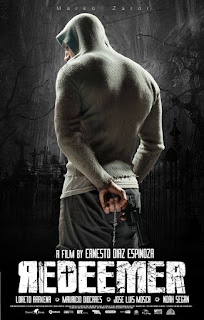 Chilean entertainment seems to start and stop at Blood Brothers with both director Ernesto Díaz Espinoza and actor/martial artist Marko Zaror. To be honest, if they keep producing such entertaining movies, I don’t know if I need much more than that. Their latest film is the actioner Redeemer, which more or less continues on the same path that their previous films like Mandrill and Kiltro have been treading. Packed to the brim with martial arts, gun fights, and hoodies, Redeemer keeps things action oriented and the rest basic. It tries to be a bit more artistic and serious than say Bring Me the Head of Machine Gun Woman, but that’s not the films best qualities and it tends to be hit or miss. If it has Zaror flip kicking someone in the face however, then it seems to be doing all right and most of the rest can just take a back seat to that.

The Redeemer (Zaror) is a man on a mission. A mission for redeeming his soul. He acts like an angel of vengeance for the Chilean people, answering the corruption and violence of sin with his own brand of flaming sword. Too bad his latest gig has him going against a plethora of drug dealers. It’s only further complicated by a young mother trying to save her child and a vicious killer called Scorpion hot on his trail.

For action junkies, Redeemer is a big heaping flip kick of awesome. This actor and director duo has already proven they can craft some fun modern action with their previous work, but Redeemer has a grindhouse-esque flair to it that really piles on the silly and fulfilling concept. It starts off in mid jog by delivering the basic idea of this ‘wandering man of faith’ who uses his particular skill set of fighting to bring about justice in just a few minutes with both a fun and dire introduction to the character and a snazzy fight sequence. Within the first ten minutes, we are giving enough of the concept to just run with it and the film only picks up the pace from there. By the third act, its full steam ahead with gun fights, fist fights, and plenty of one on one battles to satiate any action fan. The action is strong, outside of the director’s repeated and unneeded use of slow motion in the fights, and Redeemer further proves that Zaror is one of the most dynamic action stars not being used in cinema enough.


Despite its gloriously cheesy concept and impressive fight work by the acrobatic Zaror, the film tends to find itself stuck on what it wants to be. As mentioned above, there is a grindhouse flair to the film with its concept and gimmicks. The weird manner that the Redeemer always wears a hood, the silly American drug dealer wanna-be, and the often relentless violence that is never hidden, all give the film a very early 80s vibe. This is punctuated by a rather fun synth score too. However, the script tends to want to be more serious and artistic. We have a time jumping structure that flashes back to The Redeemer’s past, there are themes of ‘right and wrong,’ and a running thread about family. The acting doesn’t quite stand strong enough to sell a lot of the deeper elements and the best part of the film, a villain known as Scorpion who is hunting down the Redeemer, is hammered back to being a subplot to the main family vs drug dealer story that comes off as predictable and hum drum. I appreciate the attempts to raise the film above its means, but the film would have been better to simplify its story further instead of adding in a lot of nuance that only feels tacked onto what could have been an even more efficient grindhouse action flick.

For more discerning film critics, there is going to be a lot of issues with its low budget and patchy script, but for B-movie action fans Redeemer is guaranteed entertainment. Like Kiltro, Redeemer is going to quickly find a very enthusiastic cult audience that praises its fight work and franchise spawning lead character and concept. They just needed to find a slightly better story to wrap around the rest. I, for one, was wonderfully entertained by the film and see the potential in running this film into a full on franchise.