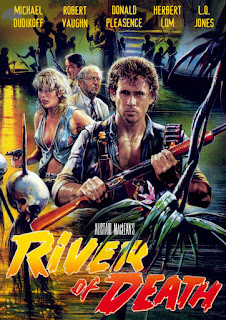 I have seen a large number of films based on Alister MacLean adventure novels in my days as a cinephile and most have been damn good films. Everything from “The Guns of Navarone” to “Where Eagles Dare” to even more obscure efforts like “Puppet on a Chain” have all impressed me to some degree. Despite never reading one of his novels (though I need to change that) and my guilty pleasure for Cannon films, I am confident to say River of Death is not one adaption Mr. MacLean would be proud of and in the end it emerges as nothing more than a poor man’s Indiana Jones knock-off. 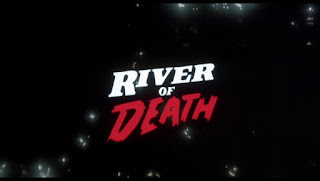 Cannon protégé Michael Dudikoff plays an Indiana Jones-type adventurer leading a doctor and daughter (whom he has the hots for) through the Amazon rainforest to help find a cure for a mysterious sickness killing off tribes. When they come across a lost city, the doc gets killed and Dudikoff’s love interest is captured. Making it back to civilization, he enlists the help of an old friend (L.Q. Jones) and the financing of a millionaire (Donald Pleasence) whom has a dark Nazi past. It seems Pleasence has his own agenda as he has a score to settle with a fellow mad doctor Nazi (Robert Vaughn) whom he thinks escaped the collapse of the Third Reich by hiding in the Amazon. Can the Dude rescue his love and thwart a Nazi plan before the credits roll? 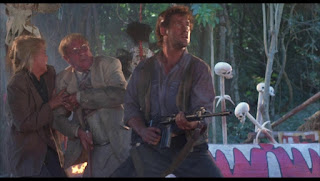 Michael Dudikoff as our adventurer still can’t act to save his soul, but there is still something about his blank stares and bland delivery that I like about him… call me crazy. He is, of course, out-shined by Hollywood legends Donald Pleasence and Robert Vaughn, who no doubt took the film as an easy paycheck, but still deliver credible performances and dwarf the talents of the entire cast around them. 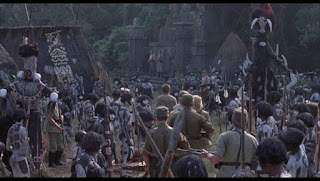 Director Steve Carver is known in the world of low-budget action films for directing a number of films for Roger Corman (“Big Bad Mama”) and even a few Chuck Norris vehicles (“Lone Wolf McQuade”) and he does what he can with the low budget and peppers the action through the entire movie: just enough to keep attention. I can’t forgive him, however, for the rushed, extremely underwhelming ending to the film that seems haphazardly slapped together with Dudikoff’s love interest subplot just wafted to the side, like it never mattered. Seriously I was a tad exasperated when the credits rolled with how poorly the film was wrapped up. 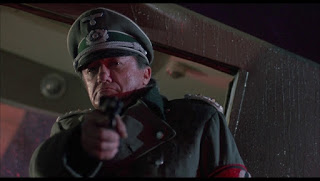 In the realm of films based on Alister MacLean novels, “River of Death” is definitely weak, but it’s still a watchable action/adventure yarn, even though it pales to the entertainment value of other Cannon-made Indiana Jones clones like “King Solomon’s Mines” and “Firewalker”. The cast is good, and there’s enough action to make traveling down the River of Death not a total waste of time.