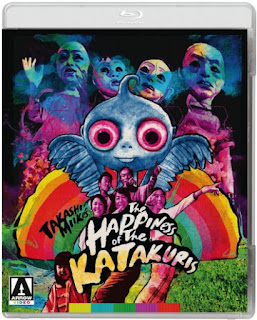 Director Takashi Miike has to be the most diverse director one is likely to experience in their film lifetime. Whether it’s the atmospheric horror of Audition, the cartoonish action of Dead or Alive, or the intense drama of Hara Kiri: Death of a Samurai, his work encompasses so many genres and such strange stories that it’s hard not to be fascinated with any of his material. Which is why when I say that The Happiness of the Katakuris is by far his strangest movie that it means something. Playing off as a sort of parody on family drama comedy musicals, Happiness is likely to be one of the most unique film experiences you will ever have…and this latest Blu Ray release by Arrow Video aptly gives the old and new fans a collector’s item worthy of the quirky awesomeness of this film.

For the Katakuris family, their recent hand built bed and breakfast is their future. It’s too bad that they built it a bit too far off the beaten path to attract many customers. That’s why when a customer rolls in at a strange hour and is found dead on the premise that they need to get rid of the body or risk a reputation for their family business. From there, the shenanigans are only starting…

If there is anything to be said about director Takashi Miike, it’s that everything in his films are intentional. So going into The Happiness of the Katakuris, viewers should understand that if things feel awkward (because they will) or that if it has radical tone changes (because it does) that those are meant to be there. This movie is very strange, but don’t be afraid of the weirdness. Just run with it. For example, there are moments where the film will convert to stop-motion animation, including an opening sequence with a sort of fairy like creature that will never been seen again in the rest of the film (it doesn’t necessarily work as well as one would assume). Again, just go with it, feel free to laugh at the ridiculousness of the film and the strange concept behind the entire thing. The film is played completely straight forward and serious, but it should rarely be taken as such. This movie is a comedy first and foremost and succeeds at it in spades even when it fringes on hints of horror, drama, and fantasy. Not all of it works, but the strange concoction has to be taken into account.


As was mentioned above, The Happiness of the Katakuris is not only a comedy, but a musical too. Yet, musical fans will probably consider it the worst musical ever made. This is because, in a way, the film acts as a parody of musicals. Songs will randomly pop up at inopportune times, the dancing is often misaligned with the music or with the group of characters doing the dances, and the songs themselves don’t necessarily follow a structure. Hell, most of the actors in the film (who do phenomenal jobs at selling their characters with their acting prowess) are not all great singers or dancers and it just adds to the entire ridiculousness and charm of the film. In particular, one of the secondary characters who dresses in a military outfit for most of the film, is hilariously off from his musical numbers. It just benefits the experience.

Yet, as with all Takashi Miike films, The Happiness of the Katakuris has a remarkable amount of heart underneath the humor. The film takes drastic tonal changes throughout and even dives into some dramatic material which is usually partnered with a comedic punch, but the focus on the family and what happiness means to them is a thread that runs through and gives some structure to many of the more ridiculous moments. The core of the film are themes that many of us can relate to – i.e. forgiveness, love, and life balance, it just all happens to have strange circumstances around it like earthquakes, zombies, and a streak of bad luck that leaves a handful of people dead.

The Happiness of the Katakuris is a film that will alienate cinephiles. It takes a rather basic story about a family who have to overcome some strange circumstances and it whips it into one of the most unique experiences you are apt to have. People will either love it or hate it. Arrow Video’s packed latest release of the film does have enough special features to graft more layers onto an already strange viewing experience. The insightful behind the scenes features, commentaries, interviews, and even a small overview of why Miike is such a unique director make this latest release of The Happiness of the Katakuris a must own for cult film fans. Not only is the film highly recommended, but this release makes it a must own.

You know you have to see this movie to believe it. Feel free to purchase the film from Arrow Video at the link below!