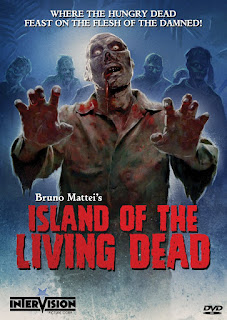 ISLAND OF THE LIVING DEAD


When it comes to Italian cult cinema, one name is synonymous with trash entertainment. That name would be none other than Vincent Dawn…errr…. I mean Bruno Mattei. This guy has seriously made hack film-making into an art form with his ham-fisted laugh-fests “Hell of the Living Dead” and “Rats: Night of Terror”. It’s no wonder the man has gained a cult following over the years. Up until viewing “Island of the Living Dead”, I was only familiar with his 80s offerings like the aforementioned films along with the likes of “The Other Hell”, “Strike Commando” and “Robowar”; I enjoyed them immensely but I never followed his career out of the 80s. For one thing, his films were poorly distributed; another reason is that all Italian filmmakers floundered after the era of grunge rock came calling. I was hesitant when news arrived that Severin films was going to unleash Bruno's final two films before his death for the first time in America. The soap opera production values in the trailer shied me away, and I just couldn’t believe that after all these years Bruno would still have the magic to make the kind of enjoyable, trashy films he so wonderfully cultivated in the 80s. After some convincing from my friend, Russell, I decided to plop some money down and give the films a shot… and you know what? He was right—digital camera-look aside, this is still the Bruno we all know and love.

We open in an island in the South Pacific where a zombie outbreak has occurred (mixed with vampire facets because… uh, they can, I guess) due to the arrival of some Spanish conquistadors. We jump ahead to modern times, and a group of treasure hunters (who just hilariously lost the treasure of a lifetime) happen upon a hidden island in the fog. This is, of course, our island of the title, and it’s not long before our rag-tag team of treasure hunters are on the run from a zombie horde with vampire teeth and even a few ghosts along the way. 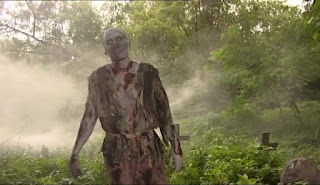 All the Bruno trademarks are here from stock footage (looking like most was taken from an old pirate film), blatant references to other films (most notably the 'they're coming to get you, Barbara' sequence from George Romero’s “Night of the Living Dead” and the rising, sheet-wrapped corpses from Lucio Fulci’s “Zombie”), exaggerated facial expressions, asinine dialogue and delivery, and abrupt scene transitions and tone. Hell, Mattei even rips himself off by having a character throw himself in harm’s way on purpose, just like in “Hell of the Living Dead”, by telling zombies to bite his arm. The one thing I had trouble accepting, even going into the picture forth-knowing, is the extremely cheap digital look to the film, as this seriously looks like a daytime soap opera. 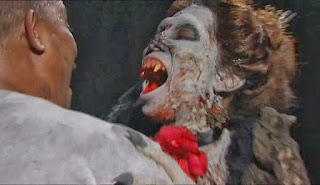 “Island of the Living Dead” proves that Mr. Mattei still had the 'magic' to make entertaining trash-fests late in his career with this outlandish attempt by him to return to the zombie genre. On the surface, this is bad as a movie can get—on par with something made for the SyFy channel—but Mattei’s direction adds extra spice to the mix, making a film so enjoyably bad that only the likes of him could create. If only it had the lovable film stock look of his classic films as opposed to the nasty, cheap “shot-on-digital” semblance to the picture, this would be as entertaining as “Hell of the Living Dead”. Though poorly distributed, it was followed by a sequel called “Zombies: The Beginning” which it was shot congruently with.