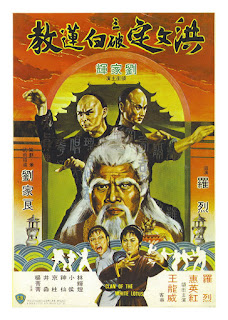 “How dare you challenge me with your so-called kung fu?” –Priest White Lotus

The Shaw Brothers studio certainly loved to play with formulas for their films, and one of the most successful ones was the established core story about the destruction of the Shaolin temples by various evil governments or clans. Following in the footsteps of Executioners from Shaolin, a sort of pseudo-sequel called Clan of the White Lotus was made capitalizing on the villainous performance of Lo Lieh as the white-haired-and-balls-of-steel Pai Mei. Only this time he wouldn’t play Pai Mei—he would be portraying his even crazier brother White Lotus (or in some versions White Brows). The rest is a half-assed story built around him. Okay, perhaps that’s not exactly how it went when they made this film – but it sure as hell feels like it.

When brothers in arms lead by the infamous Gordon Liu finally defeat the villainous Pai Mei, they return home to their respective significant others to bask in their victory. Unfortunately, Pai Mei’s brother, Priest White Lotus (Lo Lieh) seems to have a different plan, and vows to kill any of the remaining Shaolin warriors left alive by his now deceased brother.

For Clan of the White Lotus, a lot of the problems that develop for the film come from its strangely shallow narrative. It opens with our two heroes having an epic battle against the infamous Pai Mei and utilizing their combined Tiger and Crane styles. While Executioners from Shaolin focused an entire movie on this, for Clan it’s compressed to a rather rushed scene in the beginning. From there, the film moves at a lightning pace to introduce a family element with our heroes and also the actual villain of the film – Priest White Lotus played with carnivorous glee by Lo Lieh. The film then proceeds to kill off half of the cast in favor of highlighting martial arts icon Gordon Liu who, in true kung fu formula fashion, learns a new style of fighting to defeat our evil villain.


The speed that the film careens around its plot leaves little time for any character development for any of the secondary characters. The family aspect, which represents most of the depth of the plot, is horribly sacrificed for tons of training sequences and Gordon Liu repeatedly going to face Priest White Lotus…which as you can guess can be a bit too repetitive. Enough so that many of the more interesting side characters (his training partner at the paper shop, his sister-in-law and her baby, and even the villain’s lackey played by Johnny Wang) are excruciatingly underused to deepen the plot or character arc for our main hero who remains as paper thin as the paper dummies he uses later to train his skills. When you have an intriguing thread about family loyalty and then completely ignore the sort of fatherly role that Gordon Liu’s character should be playing towards his sister-in-law’s child…then there are some huge missed opportunities for great commentary.

Fortunately, the film carries enough solid fight sequences and fun gimmicks to pass itself off as entertaining at least. Fight choreography by Lau Kar Leung is truly the best aspect of Clan of the White Lotus and his silly (but fun to watch) addition of Embroidery Style Kung Fu is charming. It lacks depth, but it’s charming. Even some of the training set pieces are a bit fun. Our hero must learn to be soft in his attacks to even come close to the light as a feather villain and partnered with some physical comedy from Hsiao Ho as his friend and training partner, even these sequences seem to work. If only there was some solid foundations to build these on then maybe there might have been a classic to find here.

In the end though, Clan of the White Lotus lacks any staying power. The gimmicks of Priest White Lotus and the Embroidery Style kung fu make for some charismatic set pieces, but the film ultimately misses to have any depth behind it. The characters are often misused or underused and many of the thematic elements of revenge and family are used at surface level only. Considering its cult status within the martial arts community, I most certainly had higher expectations of the film…and it didn’t even come close to being one of the Shaw Brothers’ best. Notch it up to being fun, but pretty disappointing.