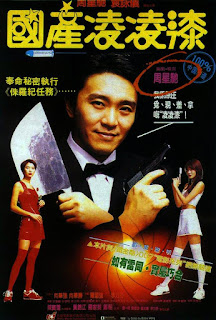 Stephen Chow is a man who genuinely cracks me up, while at the same time making me envious of his comedic talents (prowess, timing, and the way his jokes are edited and executed). One thing that keeps me exploring his films (primarily the ones he directed) is just the timelessness of how funny the films are. I will admit, I was one of those guys (well kids at the time of discovery) that didn't know of Stephen Chow, sadly, until the release of not Kung Fu Hustle (like most), but Shaolin Soccer. My younger brother was given that film on VHS as a gift once, and we both found ourselves being obsessed with the world Chow presented us and the goofy over-the-top visual jokes that seemed to come at a rapid fire pace. This is how Chow films seem to be (I say seem as I haven't seen a ton of his filmography) on average, and thus I want to keep exploring, further and further.

Finally, getting to this film, From Beijing With Love, I found myself not being able to get into the film right off the bat. The opening is sort of funny, but I just found it a bit odd. The villain (spoofing The Man with the Golden Gun) is introduced and we see him kill some people, but for some weird, possibly subconscious decision, I felt going in that I wouldn't enjoy the film. I can't quite explain why, but I felt, maybe this is the Chow film that doesn't impress me. I was gladly wrong.

From Beijing With Love, a spoof on many a things, Bond films being the obvious (complete with a Jaws parody character), is a fun, and surprisingly twisted little ride. It is complete fun and silly craziness, in typical Chow fashion, filled with funny dialogue and plenty of physical gags, but the thing that stands out most to me is how violent and dark the film is in spots (and by spots I mean pretty frequently the more the film runs on). It goes from some kills here and there to a lot of kills (while never reaching a big body count that you would see in an action film or anything), but Chow, who is the lead as usual in his films, kills some baddies via some good ole knife mastery, on more than one occasion. I don't want to really go too into detail on specifics, but I had some parts that sort of shocked me, as I didn't expect some of the brutal moments. Sure, some of the deaths are funny in a ridiculous sort of way, but some of the kills are straight up serious. It's an odd combination, but it totally works, and I found myself laughing much more than I had anticipated.


I haven't gotten into the plot yet, but it's a pretty straight forward concept. A man is sent on a mission, add the lady into the mix, and some set up and backstabbing come to the forefront. That's not spoiler territory either, that's just the simplicity of the plot. The chemistry between Chow and Anita Yuen (who I forgot to mention, does a wonderful job as the leading lady), is spot on. She is set to destroy, while Chow finds himself trying to be a ladykiller towards her. I think my favorite moments come from the scene where they are both in her house after one of the action pieces (again, no spoilers).

If I had any complaints, is that, again, I didn't feel on board until Chow gets his mission and is actually out to pursue it. The opening and things leading up are funny, but not as much as I would have hoped for. I know films take time, and I have no issues waiting (I watch those kind of films often {the slow artsy fartsy ones}), but I felt it took a moment to truly find its footing, which is a shame. Also, there is one moment in particular (a firing squad scene), which goes from being funny, to just being fucked up, and I wasn't quite sure how to take that moment honestly. The scene overall is great, minus that one distilled beat that sort of left an impression even after the film was over (obviously I am recalling it writing this a day later).

On whole though, the film delivers, and I think it is one of the funniest Chow-driven films I have seen so far, and I hope there are plenty left in his back catalog that will leave me laughing as hard as I did with this one. If you ever wanted to see that Chow sensibility, with some really bloody moments and dark humor sprinkled about, then you get it full-on here with 1994's From Beijing With Love. A Chow classic.