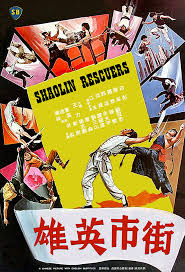 If there is anything you can guarantee about watching a Venom Mob movie, it’s that the charisma of the film is going to be top level stuff. While a lot of their films can be hit or miss overall, even the quality within a single film can be hit or miss. Two Champions of Shaolin failed to run with its thematic thread about sins of the father and Invincible Shaolin spent so long on the training sequences that it forgot about the two parallel storylines to flesh out. Luckily, there is always that charisma they can fall back on. Shaolin Rescuers, the topic of this review, is of that same vein. At times this film wants to be ridiculously epic and with a heart of gold, but too often it’s too epic for its own good and spreads itself thin. The film is still ridiculously charming and this makes it a fun martial arts film, but far from great.

Lo Meng is a small time tofu worker spending his time perfecting his kung fu while getting up early to make tofu and staying late to close shop for little money. His one highlight is when he gets to spar with his friend, who works as a mischievous waiter (Phillip Kwok) down the street and can turn any item into a deadly weapon – including a bowl with chopsticks. When a heroic rebel leader (Jason Pai Piao) stumbles into the tofu shop, injured, the two young men decide that their lives are worth the fight…even if they lose everything.

Based on the repeated setting about the government’s destruction of the shaolin temples (ala Clan of the White Lotus, Executioners from Shaolin), Shaolin Rescuers takes a decidedly new spin by having two (or three, we’ll get to that in a second) outsiders asthe protagonists instead of shaolin fighters. While they team up with a couple of those shaolin fighters who are running from the evil Pai Mei, who makes a 2 minute appearance in the opening credits, it’s this ‘everyman takes up the mantle of justice’ theme that works for the movie. It also adds a sense of consequence to the action sequences. These guys are not invincible shaolin fighters. They are flawed characters who must step up to the plate and they are against some serious odds. As the film progresses in the first act and we see the charming ‘bromance’ that these two have together and how they want to help people, it makes the audience really love them. This relationship between our heroes is easily the highlight of the film.

Unfortunately, the film tends to want to pull away from them for the sake of a more epic plot line. Director Chang Cheh, who isn’t afraid of using slightly twisted formulas/structures for his films, instead injects a lot of plot and a LOT of characters. Just in the opening credits, there are 4 shaolin “heroes” introduced that die before the credits are done. There is even a third ‘shaolin rescuer,’ played by Venom Mob member Ku Kuan Chung, who shows up well into the film as one of the leads. However, his character doesn’t nearly have the backing or connection that our other main protagonists do and he feels a bit wasted in the film. This happens again and again. Chiang Sheng is introduced, we get five villains thrown into the mix, and that doesn’t even touch on our rebel leader that our two main heroes save. There is just a lot to consume in a very short time and it doesn’t always work to its maximum (and emotional) benefit.

On the plus side, as with most Venom Mob flicks, Shaolin Rescuers features plenty of fight work. After the initial battle that leaves the rebel hero on the run, the film focuses a lot on the ‘training’ of our two leads (and the third one later) as they consistently fight one another in a playful manner. The fights remain energetic and fun at this point, but it’s the finale that sells the entire thing. A wicked five on five confrontation between the goodies and the baddies features enough weapons, acrobatics, and deaths to satiate any Shaw Brothers fan looking into this film. Not to spoil any of the twists in the final act, but there is even some emotional charged pieces that work thanks to the charisma of our cast and the pacing of the film.

Shaolin Rescuers is far from being the best Venom Mob film from the Shaw Brothers studio and like the others I mentioned at the beginning of this review, it’s a mixed effort. Fortunately, it is carried by the sheer charisma and screen presence of our cast to be highly entertaining and enjoyable…even if it misses the mark on a lot of the plot and theme work. This is recommended mostly to kung fu fans, but it’s a great way to spend a Saturday evening.

Written By Matt Reifschneider
Posted by DarkReif at 10:46 PM