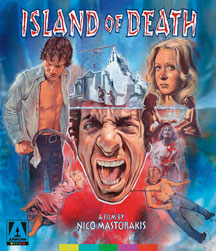 There are many mysteries in our world. The heads at the Easter Islands. Things that disappear in the Bermuda Triangle. Where only one sock in a pair disappears during laundry day. The meaning of life. Yet, I’m convinced that the greatest mystery of all is just how the hell Island of Death became a cult classic. I’m all for grindhouse trash appeal with microbudgets, gimmick concepts, and exploitative elements, but Island of Death is just trash. There is no art to this film. There is no meaning to the randomness of its plot. There isn’t even a plot at all. And while I completely understand why Arrow Video would want to release a packed new edition with its fairly enthusiastic cult following, I’m definitely not one to condone the film itself as a ‘must see cult feature.’

For Christopher (Behling) and Celia (Lyle), the little Greek island was the perfect getaway from London. Once they arrive on the small island they take to the streets of the village to admire the quirky inhabitants. However, these quirky inhabitants are horribly sinful and the deranged couple take to making them suffer for their sins.

One has to give it to Arrow Video for jam packing this release with all kinds of special features. The list above is substantial and very enlightening compared to the uncut, um, ‘film’ that is also included in this release. According to the director, Island of Death was solely made to make a profit as a low budget film. After seeing the amount of money that the original Texas Chainsaw Massacre was raking in with its violence and perversion, he decided to double…nay, quadruple down on the violence and perversion for his film. Unlike The Texas Chainsaw Massacre, Island of Death has no plot and no characters to care about. Hell, it rarely makes sense from scene to scene. However, for gore hounds and shock junkies, Island of Death is probably enough weirdness and macabre elements to satiate cravings. It’s obvious that director/writer/producer/actor Nick Mastorakis wanted to throw in as many shocking scenes (for the times) as possible into the movie. You name it and it’s in here: crucifixion, incest, bestiality, lesbian and gay sex scenes, sword killings, nude chases, peeing on people, and a variety of other deaths/killings including one with melting. Half of the time I wasn’t sure if it was supposed to be a joke or not as the lead characters (who are villains with no redeemable or connective traits) seemingly just kill people and drop silly one liners. After a short lived attempt at a plot device including a detective that might have gone somewhere if story had been a focus, they dump his body into the ocean and the character Christopher retorts a quip about hoping that the dead guy has a water proof watch. I’m not sure if I was supposed to be appalled, confused, or humored that the characters made a joke at this moment. And it’s this state of unsure apathy that haunted me throughout the film.

It’s too bad that Island of Death is so horrendously made as there are some intriguing ideas to be found here. The weird religious focus of their killing spree, the police involvement, and even a twist in the end that had our two “protagonists” starting to turn against one another. However, Mastorakis had no plan to take any of these further than to get us to the next random kill or sex (more often than not, both) sequence. It’s these half assed tidbits of stronger themes underneath the surface that indicate the truly horrifying film that Island of Death could have been, instead of the uneven schlock that we get.

While Island of Death did absolutely nothing but baffle me with its forceful hand of violence and other shock elements, there is definitely a cult following for it and Arrow Video capitalizes on it by releasing a stunning and brimming release with enough special features to impress even the most skeptical of cinephiles. The rating below is based on the film, but the release of the film gets a resounding recommendation from this reviewer. Sure the film is terrible, but this release makes it look like cinema gold.

If you are one of those cult fans or just curious about Island of Death, here's a link to order your copy from Arrow Video and MVD Entertainment.