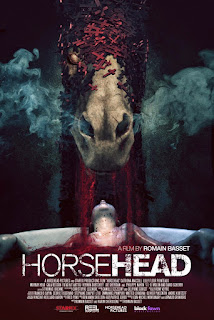 Far be it for me to make the claim that giallo is one of the best horror sub-genres out there (I can leave my brother to do that), but it’s still nice to see that the visual focused Italian style is making a comeback in the last few years. While Horsehead is not strictly a modern giallo, at least not in the intense way that Amer or The Strange Color of Your Body’s Tears was, the influence is front and center in how the film goes about using the style to tell its minimalist story. The result is a brilliant blend of modern horror tropes and classic giallo style. It’s a very slow burn picture that rarely fills in the blanks for you when it comes to plot, but the style and execution make it one of the best horror films in a rather weak 2015.

Jessica (Pointeaux) has just found out that her estranged grandmother has passed. Returning home to her overbearing mother (MacColl) and her thoughtful, but fairly new step dad isn’t her idea of a good time. When she arrives though, she finds that there are family secrets that are being dredged up by her grandmother’s passing and some reoccurring nightmares featuring a man with a horsehead that seems to want her to uncover something even more sinister than her mother’s judgement.

The core of Horsehead resides within a rather basic plot structure that one might have seen in a modern haunting film. A young woman returns home, becomes haunted by visions, uncovers some dark secrets, and attempts to solve the mystery. Bing, bang, boom. Even the basic characters are relatively by-the-numbers with our heroine being a young go getter, her mother being the usual mean and judgmental woman we have seen before, and the understanding person on the outside that desperately wants to help – this time as the concerned stepfather. Hell, Horsehead even throws in a few of the local townfolk that help them understand the mystery. In lesser hands, particularly director wise, Horsehead would have fallen into dire (read: predictable and silly) straits. It could have been a snooze fest.

Yet, despite some of the predictable plot progressions, Horsehead is an engaging and often haunting experience, powered by the visual prowess of the giallo genre and a director’s knack for showing and not telling. If there is anything about this film, it’s visually and audibly beautiful. As the film progresses and our heroine attempts to be the navigator of her dreams (queue “Dream Warriors” music now), Horsehead begins to unravel in some rather shockingly effective ways. The cast are willing to go the distance to sell the concept – including a rather unnerving and sexual moment about our heroine’s mother that really takes the audience out of their comfort zone – and the smothering atmosphere that continually builds tension until the audience is left breathless in the final minutes of the movie. This visual style is punctuated by a phenomenal score that blends classic score elements with a EDM pulsating rhythms and the combination is a Molotov cocktail of horrific effect.

At times it would be understanding how an audience member might be frustrated by the slow pace of the first two-thirds or how the film continually adds layers to the mystery that are not (and will not) be fully explained by the end of the film. In fact, the end of the film is left open in many regards and its lack of closure is sure to find some horror fans clamoring for more. However, director Romain Basset and his cast and crew make a film that is utterly dynamic and impactful in its execution. Enough so that no matter how formulaic the scripts starts out or how intentionally vague the latter half is, Horsehead is fantastically memorable. Easily one of the best horror films to drop in 2015 thus far.

So if you would like to experience the nightmare of atmosphere that is Horsehead, click and purchase the film from Artsploitation Films!