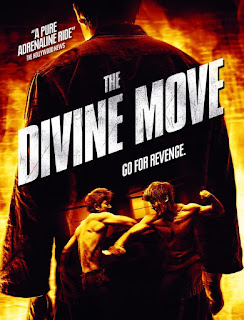 We’ve been big advocates for the South Korean domination of the thriller genre over the last decade or so, but at some point it seems reasonable to figure it will come to an end. What goes up must come down, as the old adage goes. Yet, it doesn’t even feel like the trend of South Korea putting out stellar film after stellar film is stopping…and if anything, they are getting crazier with their films in attempts to keep it fresh. The Divine Move is the perfect example. If you took one part 70s revenge thriller, spliced it with an action heist flick, injected it with a board game drama, and rolled it in some Oldboy, then you have a bit of an idea on what The Divine Move has to offer. It’s crazy, but it’s also well done.

For Tae-seok (Jung Woo-sung), being blamed for his brother’s murder is not the only thing on his mind. It’s vengeance. His brother is dead and he has to find retribution for the act, but his Go skills are only going to get him so far to find the head of the gambling ring responsible. He’s going to need fighting skills. He’s going to need a team to help him set up the perfect trap.

As the saturation point continues to grow, it was only time before South Korea would start going to some crazy places to keep their thrillers feeling fresh. Initially, I wasn’t hyped for this film despite its intriguing premise. I am not familiar with the game Go that the film uses as its basis and metaphor for the various plot progressions and it seemed like a reach that they could somehow make an action thriller around that. Even without an essential understanding of the game, The Divine Move makes impactful use of the film tropes of the various genres to get the film moving. It might have helped that I understood the terminology and how some of the moves in the game worked for the plot, but director Jo Bum-gu does a pretty admirable job at expressing the tension, fear, and excitement without it.


With the Go aspect handled shockingly well, The Divine Move focuses its energy in various other directions…and genres. The film might be driven by a character with a revenge basis against the vicious illegal gambling ring, but the film itself is built more like a team heist flick. In many ways, The Divine Move feels like a sort of sister film to another Korean heist flick The Thieves, in particular how it builds its team of players out of gimmicks – but gimmicks that play off as heartfelt and honest. In particular, a blind Go player known as Drinking Christ (played with both humor and honesty by Ahn Sung-ki) steals damn near every scene. What should have been a broad stroke character is crafted with careful attention to character detail and that kind of work pays off for the entire film.

Perhaps the most surprising aspect of The Divine Move is not in its well-executed thriller elements or its well-developed character interactions, but in its shockingly excellent action set pieces. While the film is grounded as a thriller, punctuated with dramatic and comedic bits, there are some impressive action bits added to the mix that work really well. Tae-seok learns to fight in the film thanks to his prison cohorts, and the film builds some moments into the script to utilize the hand to hand combat moments. This is highlighted by a ridiculously awesome knife fight in the final act between our hero and the main tattooed villain of the picture. Seriously, how come no one else does knife fights as awesome as South Korean films? They even managed to stuff one into a heist thriller. It shows up with a resounding “fuck yeah” for action fans.

To be honest, The Divine Move shouldn’t work with all of the genre mixing that it does. Lucky for cinephiles, the execution of this movie is only of the highest caliber. The humor works, the suspense works, the gaming elements work, the action works, and the cast chemistry is astounding. This is the kind of out of left field film that always feels like a prize and it only comes with the highest recommendation from us. Do yourself a favor, ignore the outlandish concept and just dive into the violent world of Go gambling with this film. It’s worth the bet.