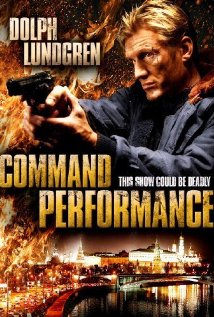 While the career of Dolph Lundgren has more than certainly had its ups and downs, bottoming out in the late 90s and early 00s, he has seen a resurgence of quality in his films as of recently. Between his return to the Universal Soldier franchise, a supporting role in the Expendables films, and solid roles in films like Skin Trade and The Package, it was high time to go visit some of the films that soared beyond me in years prior. Thanks to a ridiculous synopsis (you’ll read that in a second) and being a film directed, written, and starring Dolph, Command Performance made it to the top of the queue fairly quickly. While it’s another low budget Die Hard clone, this film is shockingly competent in its execution and was surprisingly fun.

Joe (Lundgren) is just the simple drummer for a local Russian rock band who scored a gig to open for a big shot pop diva named Venus (Smith). Unfortunately since it’s a command performance sponsored by the Russian president (Shopov,) there is also a team of savage old-school Russian mercenaries planning to hold the arena and the President hostage. With the help of a secret service agent (Baharov,) Joe is going to have to revert to his ass kicking ways to get these people out alive.

So it’s basically Die Hard in a concert venue, but with 80% of all modern action movies now aping that same structure and idea – it’s easy to overlook that simply due to the fact that the film is remarkably fun to watch. Now I’m not going to make the claim that Command Performance is a ‘good’ film, but I have to admire just how strangely effective it is. Most of the plot is horrendously predictable (I just rewatched Sudden Death with Van Damme the other day and outside of budget, the films are very similar) and often times the inept qualities of the bad guys are hilariously convenient. Not to mention, the military involvement at the end and some unfinished subplots (the cable host and her cameraman for example) tend to be glazed over quickly to focus more on the main action plot. But one has to admire that Dolph wrote and directed himself in a movie where he gets to be a rock star, save a President, and have a romantic fling with a 20-something pop star. It’s so outrageous, it’s hard not to just run with it.


As a director, Lundgren does a decent job at crafting the film. The script is where most of the issues reside (some of the characters, including his, tend to have weak development), but the film is carried by screen presence and fun action bits. Visually he tends to use a bit too much shaky cam, but when Dolph gets to jam a drum stick through a man’s skull and drop the hilarious one-liner “Don’t touch the hair, dude” in his thick very un-American accent, it’s not like the film is expecting high end art from what it has to offer. Strangely enough, even with the weak character work, there are some fun and punchy secondary performances in the film that help. The villain is owned by Legeno with his lock jaw approach, and Dolph’s partner Baharov strikes up some decent chemistry with him on screen. If only Dolph and his pop diva romance with Melissa Smith had any chemistry then we might be talking some extra points. Alas, Command Performance doesn’t have time for that as it needs more time for mercenary killing.

Command Performance is the kind of film that, just by reading the synopsis, is going to either excite you or appall you. Thus, you know who you are and whether or not this film is going to be for you. As a B-grade action fan myself, there is a lot of pieces to enjoy in the film even if it tends to be more of the same in idea and less than serious in its execution. It’s definitely one of the better ones in Dolph’s career overall just by having fun with the idea. Command Performance is not for everyone, but if you are looking for a silly actioner for the evening then it comes with a Blood Brothers splatter of approval.