Spider Baby or, the Maddest Story Ever Told (1967) 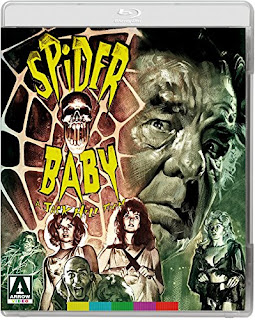 To be decently honest, I certainly avoided Spider Baby despite a few chances to see the film throughout the last handful of years. It receives a lot of ‘love it or hate it’ kind of reviews, it’s a 60s horror comedy, and it’s an early film from the director of Coffy. All of these things certainly explain its cult standing, but none of them wholly interested me overall either. With the jam-packed latest Blu-Ray release of the film from Arrow Video hitting my doorstep, I put all of my preconceived expectations aside and went into the film with a fairly clean focus…and I came out blown away. It’s a fucking riot. Spider Baby is the kind of film that truly rises above many of its own genre restraints to be a hilarious, often unnerving, and incredibly energetic film in its quirky delivery.

The Merrye Family has lived in intense seclusion for a long, long time. Plagued by a genetic disorder that makes the youth of the family degenerate mentally once they reach a certain age, the family is left to the watch of an elderly caretaker (Chaney, Jr) who does his best to make sure their affliction never becomes public scrutiny. When some long lost cousins (Ohmart, Redeker) and a lawyer (Schanzer) show up to talk about the estate, the family’s long dormant (and murderous) lifestyle will come to light.

One of the first thoughts that came to mind when partaking in the cine-carnival that is Spider Baby is that it resides as a sort of Addams Family on crack. Yet, while that comparison is quite viable in many ways with the film's odd humor, crisp black and white visuals, and opening credits which feature cartoons and a silly theme song, it’s not the whole story behind Spider Baby. Too unnerving and disturbed to be full on­­ comedy, but far too humorous to be full-on horror, Spider Baby (or in its full title Spider Baby, or the Maddest Story Ever Told) skirts a strange and effective balance of being awesomely charismatic and often skin-crawling in concept. Take just the opening sequence as an example: a fun and humorous delivery man is sent to the Merrye house to deliver a letter. He’s comic in his delivery and the film sets him up as a great slapstick character. He is then straight-up slaughtered by one of the family’s young daughters who somehow believes in her mind that she is a spider and “catches” him in her web. This sequence, goes from comedy to horror in no time flat. This is the kind of strange navigation that Spider Baby uses to unnerve the audience and then break that tension. It happens again and again. In particular, there is a dinner scene that features quite a few ‘treats’ for the audience as we are fully aware (or at least hinted at) what is included in the dinner, but the characters are unaware. It’s borderline grotesque and uproariously funny at the same time.

For a film that is so utterly strange, the biggest and quirkiest spin on the horror classic ‘normal people meet abnormal people’ angle is how we are meant to relate to the Merrye family instead of the visitors. Outside of one of the ‘outsiders,’ played with naive fun by Redeker, the rest are meant to be, more or less, the actual villains for most of the film. This leaves the Merrye Family as the main protagonists. This choice is powered by a heartfelt and lovable performance from Lon Chaney, Jr. as their caretaker Bruno who genuinely displays a sort of love and worry on screen that comes to a peak in one rather emotional scene where he must make the ultimate decision on what’s best for the family with tears streaming down his face. Of course, the family is creepy and the hinted at cannibalism of the older members in the basement makes for some decently disturbing undertones, but that doesn’t stop director Jack Hill making the audience feel for their plight. No matter how awkward Sid Haig is or how strangely charming and vicious Jill Banner gets, we side with their move.

Perhaps it was the low expectations or maybe even more so the thoughtful blend of genres and hinted at horrors within this films, but Spider Baby earns its cult status with its fantastic execution of a story that could have easily gone awry at almost any moment. It’s packed with quirky sequences and memorable performances. While it’s pretty obvious that it will remain a film to garner a ‘love it or hate it’ status, I’m throwing my two cents into the ‘love it’ category. Here’s to hoping you will too.

BLOODY NOTE: Even better is that in all of the awesome special features on this packed Blu-Ray, it’s obvious that the cast and crew are still absolutely in love with this film too. It’s not just your normal behind the scenes features or commentaries. These are love letters to Spider Baby from all of its components. It’s wonderful to see that kind of dedication to a film that rarely receives the praise it rightly deserves.

Even if you are remotely interested by the concept of Spider Baby, Arrow Video's massive release of the cult film comes with only the highest of recommendations. Not only is the film worth it, the release is packed solid. You can order your copy at the link below!