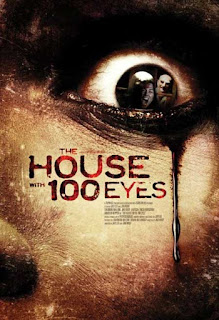 In this day and age, it’s fairly easy to create your own horror film. With what could be considered no budget, creative filmmakers have a variety of styles (many of which are popular in the genre) to craft worlds of horrific events and scary situations. This is where The House with 100 Eyes falls. Made for what looks like a handful of cash and a bottle of whiskey, this ‘found footage’ horror flick boils down a few of the current trends into a fascinating mockumentary about a couple looking to make a masterpiece snuff film. The film is very simple, but thanks to a streak of midnight black humor and some shockingly effective acting performances The House with 100 Eyes pulls of an impressive film – even with some very glaring flaws.

Ed (Roof) and Susan (Malone) are going to be the talk of the internet. They have been kidnapping people and making snuff films for quite some time now, but they are looking to take it to the next level. Installing cameras throughout their house, they plan on delivering a fully inclusive home video release of their next film – with bonus content, behind the scenes footage, and even a director’s commentary. Now all they need are three victims…

In a strange way, The House with 100 Eyes is its own commentary on the entire ‘torture porn’ trend that has dominated low budget horror for the last decade or so. Granted, I feel like that term is an unjustly negative one, but for this film it’s aptly fitting. Our two hosts are out to lure in some cash-starved young folks with the prospect filming an amateur porno for some quick cash, but instead trap them into filming the last snuff film of their lives. And while the premise promises repetitive torture sequences and eye rolling clichés, directors By Jay Lee and Jim Roof pull away from being too formulaic and add in plenty of their own thrills and kills. There is, of course, at least one torture scene as promised with some intense gore, but the rest almost falls into a thriller-like groove. It’s less about the intense kills and more about the teeth grinding tension getting there. This choice pays off. The last half of the film is a horrific game of survival that utilizes the ‘hidden camera’ approach to effective benefit. Going by the synopsis, I would have guessed this film to be more akin to Saw, but instead it’s more akin to the original Texas Chainsaw Massacre – and that’s a shockingly strong choice for the film.

While the horror and tension are surprisingly diverse and well executed, the biggest benefit (and perhaps biggest issue) with The House with 100 Eyes is the protagonist focus of the film. Instead of focusing on the heroics of our victims like so many low budget horror films do, the true protagonists of the film are the villains: Ed and Susan. Expertly acted and written with such character to bring out the almost hilarious black humor of the entire thing, it’s seeing the usual married couple bickering over something like a “murder kit” that really makes things unique and interesting. What starts off as an almost unnerving charm to the two, it quickly descends into a nightmarish spectacle as their true colors and horrific nuances come to play. Unfortunately, because the film shifts away from its black humor and couple-oriented focus for the third act, the film also loses a sense of hope – which is a key to driving an audience to run with the horror. We don’t follow the victims enough to earn it there and by that move in the third act, it’s obvious that there is no redemption for our evil protagonists and thus we have nothing to fully root for…except their demise. It’s enough to get a pass on, but not enough to lift the finale above itself which it had been doing for the first two-thirds.

And while that one issue undermines a lot of how the film ends, getting there is still an impressive feat. The House with 100 Eyes is a fully immersive, unnerving, and often hilarious ride through the eyes of dysfunction and snuff film. The creative ways that the film introduces new elements and even utilizes its mockumentary approach make it a certified gem in the genre for the year. Horror fans will want to experience what the film has to offer as it was a big surprise in quality. If anything, I hope that The House with 100 Eyes does well enough so that the directors get the funding for an even bigger horror film where they can take their creative spin to the next level.

If you would like to have The House with 100 Eyes for your collection, the link below is for its Amazon page. It drops on June 16th, 2015 from Artsploitation Films.