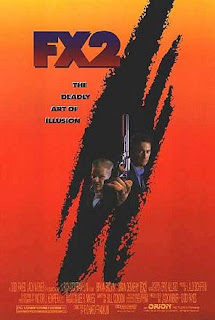 Aka "FX2: The Deadly Art of Illusion"

The original "F/X" is a personal favorite of mine from the 80s when it comes to the suspense/thriller genre with a good dose of action. Even with that praise I'm hard  pressed to believe that it really needed a sequel.  The original had a solid rap-up for a good story that did not warrant the audience to revisit. Still five years after the fact "F/X 2" was released not surprisingly to a luke warm response. 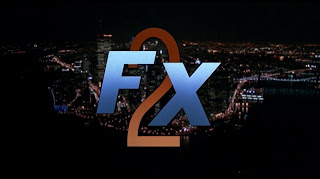 Everyone's favorite intelligent movie special effects artist Rollie Tyler (Bryan Brown) returns only this time he's given up the special effects business for good and has moved on to making high tech children's toys. This doesn't stop his new lover's ex-husband to ask him to provide some nifty illusions in order to catch a killer. Obviously not learning from his first experience, Rollie accepts and predictably the stunt turns sour with his lover's ex getting his throat sliced. Smelling a cover-up, Rollie enlists the help of his old buddy Leo McCarthy (Bryan Dennehy), now a private detective, to save his life.
Typical with sequels the plot is just a muddled down carbon copy of the original. I mean what are the chances Rollie would be part of a police cover-up twice in his life-time... seriously?!  His illusion trickery this time around also seem far more forced, shoed-in to the plot in order to meet the audiences expectations in how he outsmarts the baddies (though the mechanical clown is the most memorable). Due to this director Richard Franklin, responsible for the respectable sequel "Psycho II", is handcuffed to the script and Lalo Schifrin's music, though not bad, seems more like a rejected score  for "Romancing the Stone".
What helps this sequel rise above its predicable plot is the return of its high caliber cast headed by Bryan Brown and Brian Dennehy. In the first "F/X" they were mostly off screen from each other but here they get plenty of time and material to bounce off one another. I also dug how they brought back Dennehy's little crush as the cutesy computer nerd. Their flirting was one of the nice highlights of the original and it's nice to see that aspect brought back.
"F/X 2" is a by-the-numbers sequel. It's just plain and simple not as engaging as the first trying desperately trying to make up for the fact by shoe-horning in scenes of "movie magic" despite our character not even being in the profession any longer. The chemistry between our two leads makes it worth a watch but not worth a hunt. If you can find it in a double feature with the first "F/X" then I say go for it as it is watchable, just not memorable.