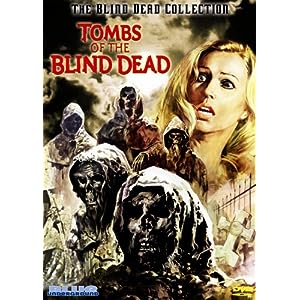 When it comes to Spanish horror, two things come to horror fans minds: 1) Paul Nashy and 2) The Blind Dead. The Blind Dead (better known today in its uncut form with original Spanish title Tombs of the Blind Dead) was the brain child of director Amando de Ossorio who took the history of the Templar Knights and tweaked it a bit in order to make a horror film with some images that will live in the annals of horror forever and continued through a series four feature films.

The plot has a sect of Templar Knights that were Satanists. Their evil ways caused the knights to be tortured and put to death by being strung up from trees and having their eyes pecked out by crows (hence the why would later be known as the "Blind Dead"). The film opens with two young women who were old friends in college run into each other at the pool. Both, along with one of their boyfriends, decide to take a train ride through an old area of Spain. While on the train jealousy arises as sparks begin to fly between the boyfriend and the other friend, so one girl bails off the train and hikes her way to some old ruins where she finds her fate belongs to the blind dead. After her body is found drained of blood, the girls friend and boyfriend then decide to ignore the local superstition and trek to the ruins to solve the mystery only to find the stories are all too real.

Not surprisingly the real stars of the film are our galloping cadavers as their hooded skeletal image are both memorable and creepy. Their image is at its best as they slowly rise from their graves as well as ride their steeds in glorious slow motion. I applaud director Amando de Ossorio for making their image so damn great. My favorite scene that Ossorio brilliantly crafted is towards the end of the film when our blind dead are hunting a victim by sound and when they lose track of her, they find her by the beating of her heart. Great stuff. The cinematography is also wonderful as Ossorio captures the lonely grassy landscape of Spain. The Blind Dead ruins truly feel like there are miles upon miles from any sort of civilization.

Though the blind dead themselves are great the film suffers from many flaws that plague a majority of Spanish horror films and one is very oddly placed scenes of crass exploitation and sleaze. Upon the train there is an awkward flashback about how our two leading ladies had a night of passion together in their younger years. This scene comes completely out of nowhere and serves no purpose other than to exploit. Latter on in the film a rape scene comes out of nowhere that also serves no purpose to the plot other than to exploit. Other than these two awkward scenes the film also suffers from an extremely slow pace and one truly disturbed lab tech at the local morgue that likes to torture frogs.

The exploitation scenes won't bother fans of Spanish horror as they are common place in the genre but they just felt out of place. Thankfully the blind dead themselves and a great ending make up for these awkward plot points and slow pace making this a truly memorable, yet very flawed, euro horror film that is a must see for euro horror fanatics, like myself. Ossorio's blind dead characters proved be a big box office draw and he would go on to direct three sequels telling different perspectives on the blind dead legend. The sequels are The Return of the Evil Dead, The Ghost Galleon and The Night of the Sea Gulls. Typical with many foreign franchises you won't know they were sequels by their titles alone.

Written By Eric Reifschneider
Posted by DarkReif at 11:16 PM