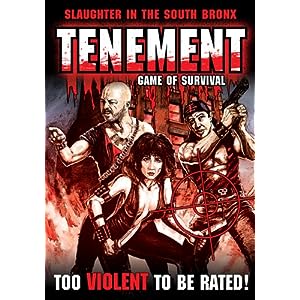 I will state right up front I like violent urban action films. Everything from Hollywood productions like Death Wish to the down and dirty underbelly grindhouse flicks like The Exterminator and Savage Streets. However the film Tenement is the bits of food left over in the garbage disposal after you grind those other films up and take a piss in the sink. It's a film that's so pointless, so tasteless, and so poorly made that this cult movie fanatic had trouble finding anything good to review on this sludge.

Our film opens (with the title Game of Survival on the title card) with a gang being forcefully removed from the basement of a seedy apartment building in the Bronx. After being released, our gang leader has some cheesy epiphany from what seems to be God to "have a good time" so the gang heads back to the apartment building and decides to torture and kill all the residents. That's the plot, no nutshell included.

Since the film has NO plot to speak of, the filmmakers decide to load the film up with "shocking" violence. We get a graphic rape scene of woman with a broom handle, a junkie throwing up blood, a man being stabbed in his junk, and a couple making love after killing a tenant complete with the man rubbing blood all over her breasts. This is only the stuff off the top of my head! I will admit that I've seen it all when it comes to violence and gore in movies so nothing really shocks me anymore and the violent sequences in this film just felt like the filmmakers were trying too hard to make up for the lack of plot and shitty filmmaking. Oh god.. where do I start with the filmmaking! Tenement is director Roberta Findlay's first legitimate film after making a slew of pornos. Guess what? Tenement looks like a fucking porno as the directing, lighting, and cinematography are just horrid. Do I even need to go into the bad acting and non-existent character development? The director has admitted she was proud her first legitimate film got an X rating. How about next time being proud for making a good or even entertaining movie on limited resources! I understand the film had a low budget but the result on screen looked like the filmmakers didn't give a shit and wanted to make a quick buck by making a crude urban action film with no entertainment value.

In the words of Frank Drebin of Police Squad, Tenement is like drinking Draino. It just leaves you hallow inside. I felt hallow after viewing the film as I went into it expecting a crude, entertaining violent urban action flick. What I got was a pile of shit that The Exterminator left after eating a thanksgiving dinner. You want a crude entertaining urban violence flick? Then go watch Savage Streets, Death Wish 3, or anything starring the late Robert Ginty. Skip Tenement and let the film rot in the weathered, run down sewers where it belongs.

Bonus Rant: I got Tenement in a box set entitled "Grindhouse Psychos" from Shriek Show Entertainment about 2 years ago. I watched about half of the film before turning the damn thing off. I recently decided to give it another whirl to watch the whole thing and guess what... the damn thing is defective! About an hour and eighteen minutes into the film the DVD began to skip and then froze. It did this on all three of my DVD players and computer. In order to finish the film I had to chapter skip past the defect and then rewind back to after it occurred. This isn't the first time I've been fucked over by Shriek Show and their glitchy reputation. I believe this is defective DVD number 12 from the company for me. If you take a look at my DVD collection you will see I own a very large number of their releases. Why you are asking? Well because they are one of the few companies to actually release cult material and it's just a fucking shame every time purchase a disc from them I have to do extensive research to see if there are any defects. Their discs are like ticking time bombs! It pissed me off at first but shame on me for not watching the disc sooner. However if any film deserves a defective disc, it's fucking Tenement!

Written By Eric Reifschneider
Posted by DarkReif at 5:58 PM