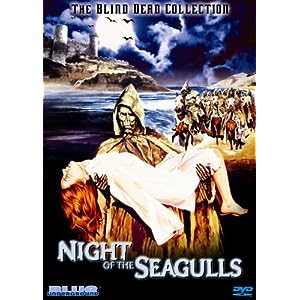 After the failed experiment of putting our blind dead characters on the high seas in The Ghost Galleon, director Amando de Ossorio wisely decided to get back to the blind dead basics in this fourth and final entry into his tetralogy. Like the previous sequels, Night of the Sea Gulls (released in America as Night of the Death Cult and Terror Beach) is just another take on the Templar Knight legend this time transposing our eyeless freaks into a coastal community setting giving me instant flashes of H.P. Lovecraft. The blind dead even seem to pray to some weird sea god as opposed to being Satanists, which was an interesting twist.

Our plot has a young doctor and his wife moving to the small coastal village as the old doctor seems freaked out and is high tailing it for the city. Upon arriving it is very evident that the residents are hiding a secret. The secret is that every seven years the villagers must sacrifice seven young women for seven nights in a row to the "horsemen of the sea". The doctor and his wife get wind of this due to sea gulls cawing in the night (hence the title) and for the fact young women in the village begin to disappear. When a young women working for the doctor is slated to become the blind dead's next victim, he and his wife set out to save her.

Like I mentioned earlier I approve of director Amando de Ossorio going back to basics with this entry and he seems to be trying hard to make a legitimate horror film and even is able to craft some moments of suspense. I also approve of him making this a darker, more serious entry into the series cutting out most of trashy elements (thanks Assorio for not putting in another pointless rape scene!). He even gives an audience a flashback sequence like the first two films which he unwisely decided against in The Ghost Galleon. Sadly this film still suffers from an extremely slow pace, clunky editing, some obtrusive music and a rather drab climax. Again there is stock footage from Tombs of the Blind Dead used with our knights rising from their graves and Ossorio seems to pad the film with extensive shots of crabs crawling towards the corpses of our young girls. Also the day-for-night shots of the blind dead riding on the beach were extremely unconvincing.

Typical with low budget Spanish horror there are many flaws but this is overall a decent final entry into the Blind Dead legacy and I would rank it only a hair below the second film The Return of the Evil Dead. The pace is overly slow but fans should dig the darker tone and the more bloody violence. I would say the series ended on a strong note and this was a nice sendoff to our memorable blind dead characters who would be put to rest indefinably.

Written By Eric Reifschneider
Posted by DarkReif at 9:58 PM