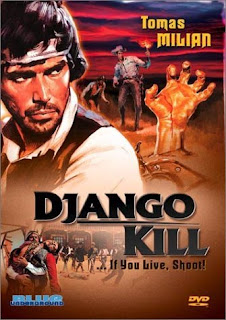 With the success of "Django" in 1966, a slew of unofficial sequels filled the cinemas through the next decade. With upwards of over 30 unofficial sequels all the titles tend to blend together after a while but if you're willing to dig through the films there is one that tends to stand-out above the rest, and that film is "Django, Kill!".

What also makes "Django, Kill" different than the rest of the pack is that it wasn't originally made to mimic or sequelize "Django". It actually doesn't feel like a rip-off at all! It was originally made as If You Live, Shoot! but was re-titled to ride the coat tails of "Django". Our character Django (played by Tomas Milian) also doesn't mimic Franco Nero's character from the original at all. Instead of a lone gunmen Civil War vet, Django this time is a bumbling Mexican half-breed. If you can't tell your better off ignoring the title and going into this surprisingly good Spaghetti Western with a fresh mind set.

Our film opens with a group of Mexican half-breeds who are gunned down by their employers after they strike gold. After the gunmen leave, our Mexican Django miraculously remains alive and crawls out of his sandy grave. Wanting revenge he heads back to town to reek his revenge with a pistol full of golden bullets!

What I love about this film is the surreal feel to it, a definite freshness in the spaghetti western genre. Tomas Milian almost seems to be a ghostly spectre out for revenge. I also dug the extreme violence making this perhaps the most violent Italian western I have ever seen (the Spanish film Cut Throats Nine doesn't count!).There is a bloody scalping but my favorite part is a sequence with a doctor digging bullets out of a dying victim of Django. When the doctor digs the first bullet out and reveals to the patient's gang that it's made out of gold, the gang shockingly all start digging into his open wounds for the gold bullets! It's not surprising the guy dies a painful death! There is another unintentionally funny scene when Milian straps some explosives to a horse and runs the horse into his old employer's ranch. After the horse explodes and director Giulio Questi decided to show pieces of the horse littered throughout the site. I found that extremely funny in a macabre sense.

Tomas Milan is again great as our lead. Is there a film this guy sucks in? Our head villain however has gay overtones but the filmmakers tend to lay it on a little too thick. He's constantly talking about how all his men look so cute in their little uniforms. Ok, i get it, he's gay! This also dates the film a bit as this was made back in the day when "gay was bad" so this in turn made the villain more "evil."

For my money "Django, Kill" is the best unofficial sequel to Django and is far better than that films one official sequel "Django Strikes Again". Still one must go into this not thinking it's a sequel to "Djang"o and view it as a fresh new film. It's got a great surreal atmosphere, extreme violence, and a likable lead. It's almost everything a spaghetti western fan is looking for, minus a truly despicable evil villain.

Written By Eric Reifschneider
Posted by Cronosmantas at 7:20 PM