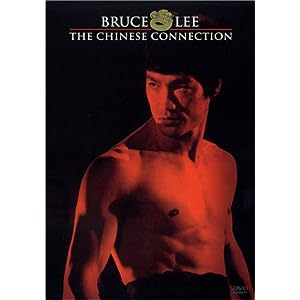 When Bruce Lee hit superstardom in his first Martial Arts romp The Big Boss, Golden Harvest quickly put Lee's second film into production and the result is a movie that many fans consider even better than his debut. The film became the crowd pleasing Fist of Fury which is also wildly known by the American title The Chinese Connection, a title made to reference the popularity of The French Connection. See the connection? Sorry, I just couldn't help myself.

The plot is very simple, which is typical for Hong Kong chop socky flicks. The plot has a martial arts teacher of a prestigious school die. Chen Zhen (Bruce Lee), an old student, travels back to the school for his teachers funeral and in an unintentionally funny scene goes completely bonkers trying to uncover the dirt on his coffin until a fellow student has to knock him out with a shovel. Chen is convinced his teacher was murdered by the rival Japanese martial arts school. The Japanese arrive at their school and threaten Chen and his fellow peers. Chen later goes their school, causes a big fight and literally makes them eat their own threatening letter. Chen then discovers a Japanese impostor in the school, kills him, and then sets out for revenge against the Japanese.

An interesting aspect about this film is the racism... and it's not subtle. It's laid on fucking thick! One Japanese representative even has a Hitler style mustache. Subtle guys... real subtle. I personally love the sequence where Bruce Lee is not allowed to enter an area which has a sign that reads "No Dogs or Chinese Allowed" and the Japanese let a woman walk her dog in right after refusing the entrance of Bruce Lee. His psychotic episode by kicking apart the sign is laugh inducing!

Bruce Lee for the most part is in a psychotic rage throughout the film. I loved this part of his character! I literally mean it looks like he's going to pop a vein in his neck in some scenes because he is so intense! His character kills a guy with one punch to the stomach, fights dirty by punching a guy in the balls and biting, and even has the strength to pick up and throw a taxi carriage down an ally! This is one martial arts hero you do not want to fuck with!

The production value is again very small and the outside sets look extremely fake. This however is typical of these low budget Hong Kong martial arts pictures and easily forgiven. The main attraction is of course Bruce Lee's amazing fighting sequences that involve hand to hand and even weapons. There is some blood but nothing that will get gore-hounds in a frenzy.

For a low-budget Hong Kong martial arts film, you can't get much better than this. It's got some great cheesy sequences, a psychotic raging hero, an awesome ending, and some of the best martial arts fight sequences ever to grace film. Plus it stars the legend Bruce Lee! If you have any interest in martial arts films then this film is a must! The film was so popular that I even read someplace that this is one of the most remade and rip-offed films in history. It even inspired two separate sets of sequels. The first had director Lo Wei return with up-coming star Jackie Chan called New Fist of Fury. Fans, myself included, tend to prefer the other set of sequels Fist of Fury / Chinese Connection 2 & 3 which star Bruceploitation legend Bruce Li.

Written By Eric Reifschneider
Posted by DarkReif at 9:33 PM