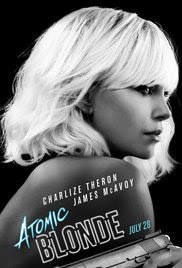 It wasn’t that long ago that the action genre got a well-deserved injection in the mainstream consciousness from the first Taken film. It hit all the usual action tropes, but it struck a chord with audiences who bought into it with vigor. This same burst happened again with John Wick a few years ago, but this time it was less about fine tuning the action film style that was popular at the time and more about using style, simplicity, and an old school approach that made the connection with audiences. Call it what you will, but action right now is being propelled by the ‘John Wick Effect’ which itself was still riding a bit on the Taken and Bourne momentum. It has launched the creative careers of the members of 87 Eleven and made a stylistic impact. So when the two directors of John Wick decided to go their separate ways, it only meant that fans would get more. From Chad Stahelski we got the just as impressive John Wick: Chapter 2 and from David Leitch we got the graphic novel based film, Atomic Blonde. Now, the reason this brief recap of the events leading to Atomic Blonde is important is that it’s the measuring stick that this film will judged and it’s one of the reasons that it ultimately feels like more of a mixed effort. Atomic Blonde features some dynamic visuals, a fun classic action concept, and the usual impressive action, but it also suffers from one key problem: forced narrative, leaving the film feeling a bit more uneven than initially expected.

As mentioned above, one of the reasons that John Wick is a measuring stick for this film, is that it’s successful on almost all elements. Yet, the one thing that makes it tick is that it’s a film that is inherently simple and then punctuated with small world building details. This is where Atomic Blonde struggles. The film is not a straight forward action film as the trailers may have lead audiences to believe and instead it’s a full on espionage film. With this in mind, the film forces in a complete plethora of twists, betrayals, slides of character, and epiphanies that are meant to shock its audience. However, with the style that Leitch brings to the table and the impressively fun performances on hand, Atomic Blonde is a film that may have benefitted from a ‘less is more’ approach to its writing. Taking a fun and dynamic character like Theron’s Broughton and trying to throw her into a film that tries too hard to confuse the audience is a hindrance to the narrative and one that makes the third act feel muddier and muddier as it goes. It’s enough so that by the time the second twist arrives, the film loses momentum for the sake of a narrative spin and there’s only more reveals set to happen that catch the brakes again and again. The twists can be fun, when executed properly, but it tends to make the film feel longer than needed and desperate to remind its audience that it’s a spy film and not a straightforward action flick.

Now, as the overly complex writing and forced narrative turns may crack the foundations of Atomic Blonde, the style and execution of the characters and action is pristine. As mentioned above, Theron truly shines here as the ultra-confident, eagle-eyed MI-6 agent Broughton who’s ferocity in combat is only matched by her impeccable 80s high fashion style and subtle character traits that arise through the various interactions with villains, superiors, and co-spies alike. She could have single handedly carried the film and when placed in conjunction with her work in Mad Max: Fury Road it’s hard to argue that she isn’t one of the most enigmatic and stunning action stars of the current action scene. She’s almost outdone by the film’s strong casting which features truly diverse work by James McAvory (following up his impressive performance in Split this year) and other genre heroes like John Goodman, Sofia Boutella, and a surprisingly fun and small role for Bill Skarsgard who is now riding on the success of his work as Pennywise in the new adaption of It. The chemistry between the casting is sparkling and highlights the thoughtful engagement that they bring to a film with cracked foundations.

As expected though, the one thing that this film will more than likely be remembered by is the visual style partnered with the jaw dropping action sequences David Leitch is known for bringing to the table. The back drop of late 1980s Berlin, on the verge of the wall falling, makes for a fantastic set for the film to take place, slathering it in a neon and tension soaked place to deliver visual pops and dynamic atmosphere for the characters to inhabit. Leitch’s attention to editing, momentum, and building truly memorable and energetic action sequences sets his films apart almost immediately so that the style of a film like Atomic Blonde can fly. As for the action itself, it’s glorious. Theron brings the pain here, showcasing her physical talents with grace and viciousness, but the design of the choreography and knack of showing the audience the action is flawless. It’s visually bright and fun, but still hard hitting. The finale, which is shot to hide the edits and create a seamless action sequence, is jaw dropping in its execution. All of the action is good, whether its hand to hand combat, car chases, or gun fights, and action fans will drool in anticipation with how Leitch raise the ante with each one.

So while the foundational writing and plotting of Atomic Blonde is faulty, particularly when it uses some very cliché elements like running the “story told through an interrogation” thread, the execution of the film is pretty slick. The visuals pop, the performances invigorating, the action breath taking, and the conceptional focus is stylish, which all leads to a film that looks and feels much stronger than it should have been with its forced twists and bumpy narrative. Action fans will enjoy it enough and it will be a film that develops its own cult audience as time goes, but Atomic Blonde is not the next John Wick despite its best efforts. All in all though, it’s easy overlook some of its issues even if they do hinder the film as a whole.

Truthfully, I hope it gets franchised even with its disappointing theatrical run. It deserves that much.