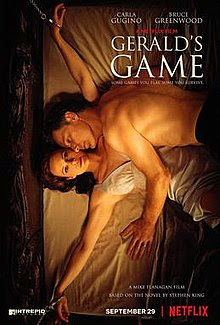 In the attempt of being honest, I went into Gerald’s Game decently blind to the whole concept. I knew it was based on a Stephen King story, but beyond that the story and concept were not all that relevant to me. I knew that Netflix had given modern horror auteur director Mike Flanagan the reigns to the film (perhaps the one reason that I was truly excited to see it), but that was it. So when the film aptly came up and assaulted me with its sharp messages in its character study structure and fluidly crafted a film that blended dire realism with nightmarish blurred realities, it was a shock to the system. Not only is Gerald’s Game one best Netflix original films released by the increasingly fantastic original content from the streaming giant, it’s one of the best films of the year…period. It’s executed with the finesse of a craftsman at the height of his artistic talent and put together with the intelligence and fearlessness to not let it’s more ambitious portions stop it from going where it needs to. It’s a psychological horror film of the highest degree and it further proves the power of its creative foundations. Gerald’s Game is not a game at all. It’s a statement.

To even make the claim that Gerald’s Game is Flanagan at the height of his creative process is almost discourteous to the material this often overlooked master of horror has accomplished. He proved his worth with complex blurred narrative in films like Oculus, as a franchise savior with Ouija 2, and in the realms of low budget effectiveness with Hush and Absentia, but in Gerald’s Game he’s refined it down to an expansive art. It’s in this film that Flanagan strikes the perfect balance between horror of a slightly exploitative nature and the artistic merits of message, character, and detail.

On the surface, Gerald’s Game works as a realistic fight against time for survival. Jessie, played with increasingly effective tension and manic power by Carla Gugino, finds herself handcuffed to the bed of a remote summer house when her husband Gerald, also played with remarkable nimble and subtle reflections of Gugino’s performance, has a heart attack while they attempt to rekindle some romance in their marriage. The premise is simple. The consequences are life and death. Flanagan and his cast and crew are able to portray that with impressive effectiveness. Not that survival horror is anything new to the genre, it has it’s own sub-genre after all, but Gerald’s Game is one that wraps the rising tension, obstacles, and scares with power and realism to keep the audience sliding off of the edge of their seats. Something as simple as reaching a glass of water above the bed mantle becomes a test of courage and ingenuity and it’s the performance of Gugino that anchors the entire thing. It’s not a horrifically terrifying film in the classic horror sense (although it gets there once the dog shows up and her imagination fueled by panic and delusions starts to work into overdrive), but the increasing tension and grounded sense of ‘what would I do?’ make it feel all too real and that’s often more truly horrifying than any jump scare that Flanagan could throw at his audience.

Yet, as I mentioned, survival horror isn’t new and well executed films in this genre are not uncommon either. This is where Gerald’s Game gets clever with its premise. Beyond its survival mentality that drives the plot forward is a film that is also slathered in fantastic character study elements and a blurred sense of reality that functions as both a dynamic narrative and a manner for the film to explore its messages and themes. This is where the spoilers for the film may get a little too thick, so I’ll attempt to be vague, but the manner that Gerald’s Game unravels its exploration of her life and the choices that lead her to be in this situation is not only natural but almost just as horrifying as the survival horror aspects. It explores many larger questions of gender roles, secrets, and why people do and don’t attempt to clean their own conscious from the burdens of their past while it continually pushes boundaries to make its audience just uncomfortable enough to ask these questions of themselves. Gerald’s Game works deeper than its surface gimmicks and plotting that it would have its audience believe and the further that Jessie, along with the audience, crawl down the proverbial rabbit hole the harder it gets to clearly see how it will end. It’s a trick and brilliant maneuver that seems like it could have imploded in translating from the written word to the cinematic world, but every creative aspect involved in the film seems game to push for it and it works to stunning effect.

Now, the final act – and more particular, the falling action of the film - seems to be the part that is the hardest part to swallow. Yet, again without trying to give too much away, it’s perhaps the most essential part of Gerald’s Game. As the audience digests the layered themes and character study pieces that create the foundation for the effective survival horror story being played, there needs to be a portion that showcases that Jessie has done the same work as the audience and this finale shows that the end of the rabbit hole she has descended, for better or worse, is the end of this story. Whether viewers like it or not, for all of its unique moments it features, this is the way that Gerald’s Game needed to end and it’s with a welcome sense of relief to realize that Flanagan and company did not hesitate to go there.

So yes, for all of the shrapnel that is hurled at Netflix for their non-traditional cinematic avenues, they have been the company to support some daring cinematic adventures. In a way, Mike Flanagan has become one of their main hands to craft daring cinema in the genre portions of the landscape. Gerald’s Game is ambitious in its simplicity, dynamic in its care of the key ingredients of effective film making, and finds the perfect balance of shock, heart, and redemption in them. It’s a film that will make you uncomfortable, push you to some places that the normal mainstream horror film won’t even go, and it does it with confidence and style.

To say it again, Gerald’s Game isn’t a game. It’s a statement. See it immediately.

Written By Matt Reifschneider
Posted by DarkReif at 5:44 PM