No movie was safe from an Italian knock off, particularly if it was popular and made money. Almost every major genre film that made an impact in the 60s and 70s had its fair share of Italian rip offs whether it was Alien or Mad Max, Jaws or The Exorcist. In the case of this review, it was The Vikings that found itself the inspiration for its own brand of Italian spice. The trick of this one is that Erik the Conqueror, the film at the center of this review, just might actually be as good – if not better – than the film it was inspired by. Much of this has to do with its director, the iconic Mario Bava, who simply takes what could have (and rightly should have) been a carbon copy and injects a wickedly effective mesh of fantasy inspired visuals, charismatic performances, and occasionally surrealistic tones into an adventure film that rises well above and beyond the norm. Erik the Conqueror is more than a cash grab, it’s an artistically powered piece of cinematic entertainment that’s realized in all of the most amusing ways. No wonder this was on the list for a new Blu Ray release from Arrow Video. It’s a cult cinema dream and deserving of the attention of this release.

If you’ve seen the 1958 film The Vikings, directed by Richard Fleischer and starring Kirk Douglas and Tony Curtis, you already know the gist of what Erik the Conqueror is about. In a lot of ways, Erik has no qualms with wearing its influence on its sleeves either as it pulls damn near the entire structure and entire moments into this version. Yet, the basic tropes that the film is based on, forbidden love, brotherly parallels of familial drama, and loyalty to the quest on hand, are all ones that so many adventure films have used as their cornerstones. Erik the Conqueror is damn near Shakespearean in how it handles all of these things too so it’s not like it’s a pure carbon copy of Fleischer’s film. It still features some strong performances, particularly from our two-leading gentleman who handle their screen presence with impressive qualities, and plenty of dramatic pizzazz to sell some of the more outrageous elements of the script. The pacing is particularly punchy as it wastes no time in maneuvering its pieces to get to the next big battle or emotional key moments between characters and that comes as a compliment to the film not meandering around trying to develop too much of a universe or epic foundation for the rest of the film. If anything, it’s a fairly straightforward classic sword and shield kind of adventure film and it just so happens to have the brilliant (if not occasionally eclectic) direction of Mario Bava to give it power.

Which, to be honest, it’s Mario Bava that allows Erik the Conqueror to really expand and breath as a film. The use of sets and fantastical imagery gives the film a distinctly otherworldly look especially in the use of contrasting the large colorful viking world, complete with hellish colors and a giant scary ass tree, to the stony cold British castles while the bright colorful schemes of the lighting, costumes, and make up add to the spirited adventure tone that the film embraces so well.  This is Bava 101 for those who have seen any of his other films and Erik the Conqueror uses it to maximum effect here. Not only does Bava bring his A-game to the film visually, but the man knows how to craft some serious tension and balance the entertaining adventure tones with the more serious film making foundations. A perfect example is the sequence where Erik must climb the outside of a castle using the arrows shot by fellow fighters. This is a scene that is also in The Vikings, but here Bava shoots it with some fantastic pacing, using the performance, the sound of the drumming, and the bright visuals to craft one of the most intense sequences of the film. The viewers already know the results of his actions, at least in some assumed manner, but the way that Mario Bava builds the entire scene makes it one of the best ones in the film.

To add to the experience, this Arrow Video Blu Ray release of Erik the Conqueror has some solid special features to go with it. In particular a nice little visual essay comparing the film to The Vikings makes for an informative handful of minutes and, of course, a Bava release via Arrow means another fantastic commentary from Tim Lucas which always comes as a highlight of any of their releases. It’s not a release with the all-consuming amounts of features, but each one is relevant and impressive so fans will definitely love what it has to offer.

All in all, with tempered expectations going into the film, Erik the Conqueror is a massively entertaining success that raises well and above being just another Italian knock off and soaring on its own power. The direction of Mario Bava is effective and oddly eclectic at times, but it empowers the performances, visuals, and sense of genre punch to give the film its own feel. Fans who are not into the entire sword and shields/sword and sandals kind of cinema may not find a lot of redeeming qualities in its formulaic approach to its foundations, but enjoy it for the excessively awesome execution and it’s a fantastic addition to any cult cinema fan’s collection. 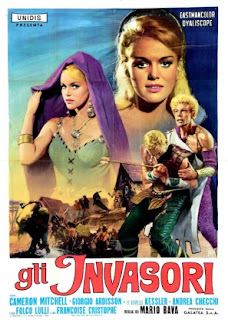