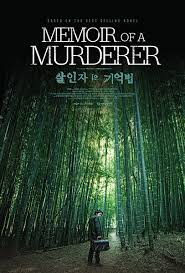 After Well Go USA released the initial trailer for Memoir of a Murderer, I felt a tad underwhelmed. In many ways it looked like a less intense cross breeding of the phenomenally hard hitting I Saw the Devil mixed with the gimmicks of Memento. Yes, both of those films are fantastic, but considering the hype I had been hearing for Memoir, it did seem a tad underwhelming in the grander scheme of things. I guess I just have never learned my lesson. Never, ever underestimate the effective execution of a South Korean thriller. Not only does Memoir of a Murderer live up to the comparisons to both I Saw the Devil and Memento with the style and approach of its plotting, but it soars on its own powered by emotionally intense performances and one of the most engagingly shifty narratives to grace cinemas this year. Memoir of a Murderer is a thriller of the highest caliber ready to leave its viewers breathless and spinning in their own thoughts.

Far too often it’s easy for a review to use cliché statements for a thriller like ‘a roller coaster ride’ or ‘leaves you on the edge of your seat’ to describe hundreds of films a year. For a film like Memoir of a Murderer, those kinds of statements and exclamations simply will not do. That’s because to feel that way a film would have to indicate what direction it’s going with the climbs, falls, turns, and edges of where it keeps its audience. Memoir has no intent to let the audience known where they stand in the film. There is no edge of your seat because it dangles you off of an edge that may not even be there. There are no roller coaster thrills because the ride you’re on has no distinct direction at almost any time despite its gathering momentum. The narrative is built on the dementia affected memories of an old man, a serial killer who gave up his craft 17 years prior after an accident left him with problematic memories, who accidentally stumbles into the path of another serial killer who has now taken his daughter into his sights. Because the main protagonist is such a remarkably unreliable narrator with his seemingly watery flow of thinking, the plotting and narrative structure is just as fluid and thusly hard to decipher in a traditional sense. Memoir intends to keep the audience at a disadvantage, not unlike our protagonist when he attempts to follow his own trails to find the killer, and it makes for a nail biting experience where the spins and twists of its plot, characters, and narrative may be going one way that’s not at all what it seems.

Of course, when talking about the rather fog laden approach that Memoir uses to keep its audience and characters unsure of the next few steps, it’s necessary to keep things vague. The film is littered with surprises and shocks as it goes as a thriller, but it requires a rather impressive set of executed facets to be able to pull it off as well as it does. Namely, under the careful details guidance of director to maintain the fluidity of its style, the performances of the cast are simply stunning. Sol Kyung-gu, who portrays our lead protagonist Kim Byeong-soo, circumnavigates the massive range and instant switches of thought that the role requires with impeccable craft and it allows a cornerstone for the rest of the cast, further stacked with a heartfelt performance from Kim Seol-hyun as his daughter and a charmingly creepy run by Kim Nam-gil as the other killer Tae-joo, to build an impressive wall of powerful screen presence to sell the harder to believe pieces of the script. Director Won Shin-yun maintains the tone and tension around their performances to keep them moving in whatever direction the narrative is currently billowing and his ability to make repetitive scenes (including one around the car wreck that gave our protagonist his memory issues) new and fresh no matter how many times they are shown or how new details are added or subtracted from the information viewers were previous given. By the time it reaches the third act, it’s the execution of the lofty concepts by the visuals and cast that carry the film through its potentially hazardous plot and it delivers on all of its promises that it subtly glues together for the audience.

The lesson learned from Memoir of a Murderer is that an audience should not always judge a film by its concept and, in the case of this truly dynamic South Korean thriller, one should also never attempt run too far ahead of the narrative. The tropes and ideas are all present in the film, but it does not play by the rules and always keeps its audience feeling like they are three steps behind the characters. It’s a film that challenges the viewers to run with it, but it refuses to lay out the pieces the way that would be assumed. This leaves Memoir of a Murderer as one of the most impressively fresh feeling thrillers of the year and one that daring cinephiles will want to experience. The execution is practically perfect, the story is approached refreshingly, and its ability to bend the tones of good, bad, heartfelt, and awful makes it one that’s never predictable in its emotional core either.

So shake off your expectations, step into the shoes of a serial killer for a smidgen under two hours, and enjoy what Memoir of a Murderer has to offer as another fantastic South Korean thriller. Always remember that memory can be a killer.

Written By Matt Reifschneider
Posted by DarkReif at 2:53 PM