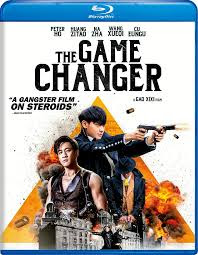 There is a cliché phrase used that says ‘there are two sides to every coin.’ Often, this is in reference to two separate ‘sides’ that are based on the same foundation or part of the same core. But I’m sure you know that. It’s why it’s a cliché phrase. Yet, this was a phrase that repeatedly slid through my head as The Game Changer played out in front of me. It’s a film that’s one part gangster drama and one part outlandish homage to John Woo action films, embedded in the same film. While both sides, the dramatic and the action packed, are part of the same film, they definitely feel as though they are on opposite ends of said same film. Both sides have their own fun details, including some concepts and visuals, but they feel disconnected. For what it’s worth, The Game Changer is still a lot of fun and has plenty of elements to admire, but as a cinematic whole is stumbles in trying to rise above being a silly action film leaving the results as two sides, enjoyable on their own, yet hardly connected.

Based on the successful Chinese television series Shanghai Bund, this “inspired by” adaption of the series most certainly feels like it was meant to be much longer than it is. Running at well over 2 hours long, The Game Changer invokes a much grander scheme, utilizing its 1930s Shanghai back drop to develop an entire gangster world – complete with rival bosses and political scheming, along with a brotherly bonds, and a romantic rectangle between the various lead characters. It’s a lot to consume, particularly when some of the context is glossed over rather quickly in the opening sequence and it took me two watches to really latch onto what the film had to offer as it comes to the plotting and narrative.

For all of its gangster spurred twists and turns that only continually get messier, stranger, and more outlandish as the film goes on, The Game Changer is built on some easy to follow relationships that hold it all together. The idea of a brotherly bond in the classic John Woo sense between the two leads of the film, the fatherly figure that is presented by Tang (and played with remarkable screen stealing ability by Wang Xueqi) and the romantic angles, where it starts with the two leads and Tang’s daughter and then gets more complicated by a figure from Lin Zihao’s past, all give the film a decent amount of heart. Peter Ho, as Lin Zihao, and Huang Zitao, as Fang Jie, get better as the film goes on and their characters become less caricatures and more fleshed out, while the entire cast seems game to give it their all even if some of the execution is a bit hit or miss ultimately.

Of course, this dramatic and character driven portion is just one side of the previously mentioned coin that is The Game Changer. The other half is the more entertaining and outrageous action portions of the film. The entirety of the first act is dominated by various action scenes including prison breaks, car chases, shoot outs, assassinations, and an opening scene where Peter Ho kicks ass while chained down. It’s almost hilarious at how much action they initially pile into the film to hook their audience. It slows down after that initial barrage to make sure the previously mentioned characters and plotting start to take shape, but the film rarely holds off on the ridiculous action for too long with chases, fist fights, and gun battles galore. To top it off, the film owes a huge heaping thank you as it attempts to not only replicate the slow motion punctuated and overzealous action cheese of later era John Woo, but it whole heartedly tries to outdo it in Woo-isms. The film is littered with eye rolling action, throughout the whole film too, where assassins kick people out of windows and kill multiple shooters before perfectly landing on the top of a car, our heroes can power slide a bicycle while standing on it and firing two handguns, and finale practically goes full Rambo. The execution of these moments is more hit and miss than I care to admit with shoddy green screen back grounds and awkward transitions throughout the film, but if you are willing to just consume the action for what it is (silly, physics defying spectacle) then it’s very entertaining.

Despite the fun to be had with the wink-wink action and the decently strong dramatic elements with charismatic performances from the leads to carry it, there is one aspect of the film that undercuts a lot of The Game Changer. It’s that for whatever reason, director Gao Xixi struggles getting the two parts together in smooth transitions. Between scenes and even within single scenes themselves, the transitions between action scenes and dramatic scenes is awkward at best. Normally, this is not an aspect of a film that singles itself out as the main issue, but for The Game Changer it continually trips up the flow of the film making the two sides of the coin feel miles apart and lacking the carry through of emotional or character beats from one scene to the next. It's disjointed and problematic.

Still, despite the flaws in execution through effects or transitions, The Game Changer remains an uproariously fun time for its audience. The performances are charming, the core emotional elements are easy to consume, and the visuals of the setting and brilliant use of colored lighting give it something of a fresh look for a gangster era set action flick. Let’s not forget the action is outlandish and a complete blast. Go in with a grain of salt though and The Game Changer is an easy film to enjoy. Just don't think too hard about it.