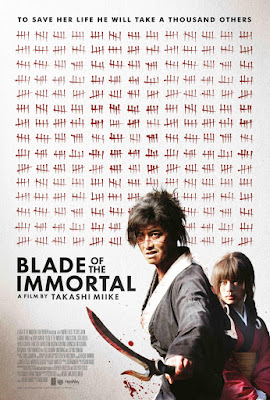 As it was very well publicized in the US as a marketing ploy for the film, Blade of the Immortal marks the 100th film by Takashi Miike (which, for the record and at the time of this review, he’s now in post-production of his 102nd film although that’s certainly a debatable number entirely based on the credits themselves, but I digress) and it’s fitting that this film would mark his transition into the triple digits. It’s not because Blade of the Immortal is his best film. When a dynamic director such as this gets to 100 films of such diversity it’s hard to make claims of what’s his ‘best’ simply due to the ground he has covered, but this film feels like one that’s decently consumable on a mass scale yet still feels like it pulls aspects from a lot of his various films for its execution too. It’s like a greatest hits of style and pieces of his long and illustrious career wrapped into one massively entertaining spectacle. While that sounds like perhaps the film is watered down overall, Blade of the Immortal is not. It’s a film that takes a rather simple core structure and builds a world of characters and gimmicks around it that never ceases to entertain and draw the audience into their lives. This is Miike at some of his most lavishly entertaining and it’s a celebration of his style that serves as a declaration of his continued momentum towards being one of the most ambitiously prolific directors ever in any worldly film market.

Now I could go on forever about Miike and his talents, but it’s films like Blade of the Immortal that cover the basics of just how effective he is at handling off beat material. Based on the popular manga, Blade of the Immortal follows Manji, a samurai cursed to never be killed, as a young woman seeks him out to help her take vengeance on a group of rogue killers that slayed her father in their aim to combine their talents to rule the swordsman world. The core of the film is simple, not unlike many classic action films of the past or samurai films of decades ago with its world-hardened anti-hero and his young naïve cohort as they battle through hordes of skilled villains, and in this simplicity is where Miike can layer in style and execution points to lift the film above many of its peers. However, it would be lying to not say that the film does suffer slightly from being an ultimately predictable one in its structure and the formulas that it uses as its foundation. One can essentially clock on their watch when our scarred Highlander-meets-Sleepy Eyes of Death anti-hero will defeat the baddies. Blade of the Immortal is not a film to throw in a lot of huge twists at its audience and it prides itself on being an easy to follow narrative and one that a larger audience can tap into. In that regard, it accomplishes its task and makes an action film that even non-Miike fans can easily enjoy.

The style of the film is where it soars though. Blade of the Immortal might be simple in its structure and narrative flow, but it’s the high energy visuals, the iconic characters, and strange off beat sense of slight genre bending that allow it to feel like the Miike greatest hits mentioned above. The action is brilliantly impressive, combining the ultra-violent bursts of brutality of classic 70s samurai cinema (ala Lone Wolf and Cub) with the intricate technical choreography of modern martial arts epics. The characters are instantly memorable and dynamic mixtures of the manga source material and humane emotional beats using a balance of nuanced performance, heartwarming chemistry between our two heroes, and outlandishly sold dialogue keep it moving. This leaves Miike a lot of ground to work with in his usual defiant genre manners and he blends the action, drama, fantasy, and dark humor in an instantly addictive concoction that will have the audience on the edge of their seat, laughing, crying, and wincing in equal measure. Style is the name of the game in Blade of the Immortal and if that’s what you crave you’re going to leave a very happy viewer.

Like many of Takashi Miike’s classic cult cinema works, Blade of the Immortal is going to instantly have a dedicated following. The sheer execution and charm of the performances, visuals, action, and brilliant genre shifting easily lift it well above and beyond its easy to consume and formulaic structures. Blade of the Immortal is the kind of film that deserves it too. It’s stylish and confident. It’s quirky and fun. It’s heartfelt and impactful. It’s pure Miike, grounded in the entertainment of exploitation and highly artistic in that concept.

Blade of the Immortal slices and dices with the best of modern samurai cinema and has way too much fun doing it. Bravo.

Written By Matt Reifschneider
Posted by DarkReif at 6:26 PM