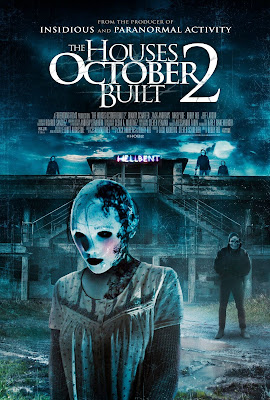 The House October Built 2 was announced as a completed film only a few months before it debuted. Seeing as its predecessor built up a decent sized cult following of dedicated fans, a sequel was certainly one that was asked for, but not one that was wholly expected. Still, a franchise of building up a secret evil haunted house cult that hunted down people seemed intriguing and worthy of a expanded look through multiple entries. Even I got a bit excited at the idea and I didn't even even really like the first one. So with a returning director and the entire cast returning I was ready to see what The Houses October Built 2 was willing to take me.

Yet, it was the idea of the returning cast that initially seemed odd. That is because, now there are spoilers for the first film in this review for the second, it was heavily suggested that the characters did not survive the ending of the first film – or were at least left for dead in buried coffins with a wide open ending. It was the ending that truly kind of made the film enjoyable for me as it was rather unexpected, but weirdly fitting. So the fact that director Bobby Roe decided to bring back all of the characters for The Houses October Built 2 is not only strange, but very ill fitting.

The problem of bringing them back for another round of haunted house shenanigans is that the audience is left knowing that the evil haunted house, The Blue Skeleton, is not out to kill its patrons and it leaves this film feeling as though there are no consequences worth caring about. The characters were fine and, more than likely, they will be fine even with The Blue Skeleton stalking them again. So unlike the final half of the first film, there is no sense of danger to this one and even when the finale tries to tell us otherwise it’s not sold well enough to change the audience’s mind. This is a sequel that serves no purpose to further the tone or experience as much as it is to cash in on the success of the original. At least, that’s what it feels like.

Of course, that’s only the tip of the iceberg to why The Houses October Built 2 fails as a sequel and as a film. Once again, Bobby Roe and company try to replicate the success of the original by using the exact same formula for the film. This time it feels less like a film dedicated to haunted houses and more like the cast was asked by some cool Halloween gigs to come feature them in a new movie and they would get paid for it. The film falters in the same regards as the first one in this process. Since it’s the same formula, it, once again, spends over an hour having our characters go from haunted house gig to haunted hay ride to zombie 5K with little in the way of expanding on any kind of mythos or storyline. The first one was bad enough meandering through to get to the interesting ideas and this one does the same damn thing and it’s far more irritating this time around. When it finally got to The Blue Skeleton there was only 20 minutes left and I was already mentally checked out.

To add insult to injury, the one key thing that kept The Houses October Built interesting was its naturalistic character interactions and fun moments hanging with them. Since it didn’t make sense to bring them back, that is already ruined and the writing struggles to get them to that same place – which it never does. In fact, since Brandy is a character that is still traumatized by the events of the first film and struggles with the entire formula of this one, they all just seem like giant assholes forcing her to do it for money. Right away the audience hates them for being so stupid and for being such awful people to do this to their friend. So there isn’t much going on here to save this film in the character category either. There's no additional backstories given, it's just them on a ride with no particular motivation other than money. Awesome stuff, guys.

The Houses October Built was already a film that was given a lot more credit than it deserved for being a great film to begin with, but The Houses October Built 2 solidifies that the entire idea may have been an anomaly. This film has almost nothing going for it. It ruins the ending of the first film, it’s formulaic structure is poorly engaged, there are no scares since there is no sense of consequence or fear to be had, and the returning characters all seem to be asshole variations of the ones that fans liked in the first one. Not only is this one of the worst executed horror sequels I’ve seen in a long time, it just feels like a cash grab on the good will of fans who stood up for the original.

If it does have anything going for it, it did make the zombie 5k look like fun. So I suppose there is that? Otherwise, skip the film. It's one of the worst of the year.