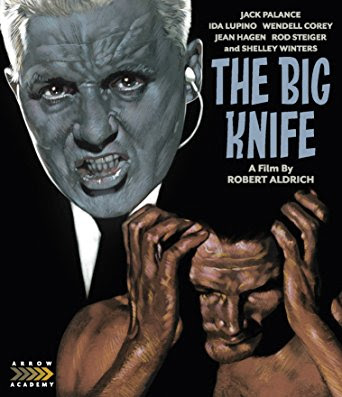 “I’m a deductible item. They write me off in the books!”

Perhaps the biggest thing that plays against The Big Knife is that it was released the same year as Robert Aldrich’s iconic film Kiss Me Deadly. While the former is not nearly as strong as the latter, for some reasons I’ll dig into here in a second, it’s not a film that should be as forgotten from the cinephile mainstream as it has been with time. It’s flawed, yes, but The Big Knife is also a film that provides a rather cynical and vicious look into the dark side of 1950s Hollywood ideals with its character study and dialogue focused framework that shines in its small details. It’s a film that may not interest the more casual film fan, but it’s a film that deserves to be viewed again with the brilliance of hindsight and this Arrow Academy release provides the perfect setting to do so. It’s one more moment where Arrow finds those hidden classics of cinema and brings them back into the light and with a film like The Big Knife it just might kick start a new found appreciation for a cult classic.

Director Robert Aldrich was known for his ability to craft tension and push boundaries throughout most of his career and a film like The Big Knife, while not nearly as violent and caustic as its title would indicate, is one of those films where his nihilistic tendencies lurk tensely under the surface. Based on the play by Clifford Odets, The Big Knife is a slow burn noir more intent on developing the main protagonist’s character through dense dialogue and interactions than truly pushing a plot through action or large sweeping visuals. In many ways, the film seems to be rather true to its play foundations (I have not read nor seen the play so perhaps I’m mistaken here and I apologize at this point if I am) as the film intentionally keeps this simple in its setting and static in its movement. This is both respectable and problematic as The Big Knife lacks a certain cinematic quality through most of its run time that pulls the experience away from what could have been some fascinating choices visually that may have given the film much punch or interest as it went. It can also be a little drawn out in its development.

On the other hand it seems intentional by Aldrich and his team. The film is about a big shot Hollywood star, played with dynamic screen presence by Jack Palance, who has become cornered, in many ways, by a tragedy and his own career that’s tearing apart his marriage and his life. The audience rarely sees his character outside of his house and there’s a sense of that entrapment by the limited settings and how he’s surrounded by possessions that never seem to be his in a house where people, his friends and foes (or both?) just meander in and out with little regard to his own privacy or feelings. Not only do we get the idea that this large, imposing man (again, casting Palance is a brilliant move here) is losing power, but he’s losing his own sense of self to those around him. It’s paralleled by his wife, who also seems as lost as him, and the struggling moral moments of his friends and peers which is perhaps highlighted by a sequence where he meets up with a fellow actress signed to the same studio who deliriously delivers the quoted line at the beginning of the review with a frantic and spastic tone. The Big Knife is not so much of a noir about femme fatales and murder mysteries as it is a film about the loss of life to the system and the powers around that see a person not as a person, but as a product.

As mentioned, the casting in The Big Knife is impressive and well rounded, anchored by the always enigmatic and screen devouring Jack Palance, but occasionally it can be a tad overacted for its own good. The film is detail oriented and dialogue driven, so to keep things visually arresting some of the performances can be a bit overzealous and it pulls the film out of its momentum. This inherently goes towards the usually impressive Rod Steiger who seemingly goes a tad far with his obvious villain motifs as he delivers his threats and monologues.

Still, even with its heavy handed anti-Hollywood elements and slow burning, long takes that drag on a bit too long, The Big Knife is a film where it’s uneasiness and tension truly highlight the nihilistic tones and dark, depressing character work with relative ease. It’s a film that’s a bit hard to digest for more casual film goers and certainly pales in comparison to Aldrich’s other 1955 classic, but it’s also a film that deserves a bit more credit than it tends to receive. It has some phenomenally dynamic performances, the nuanced dialogue is sharp, and the final 15 minutes can be a real shock for those invested in the film. Arrow Academy has pulled another great gem out of the past and brought it into the present with this slick new Blu Ray release and while it doesn’t have a lot of features, the commentary is a nice touch though, it will be a fantastic edition to those cinephile’s collections of more obscure classics. 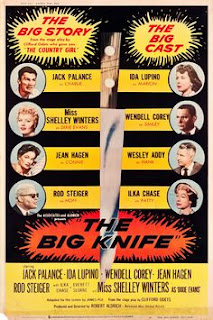 Written By Matt Reifschneider
Posted by DarkReif at 6:06 PM