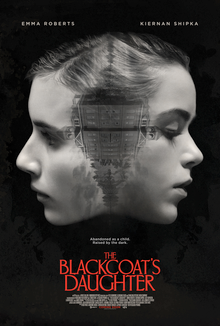 Oz Perkins is setting out to establish and conquer a niche corner of the horror spectrum. I was a massive fan of his previous (debut) film, I Am the Pretty Thing That Lives in the House, and I was looking forward to see where he would go with his sophomore effort The Blackcoat’s Daughter. His first film was certainly divisive for those who watched it and while this one will most likely divide viewers again with its atmospheric and vague approach to plot, he improves on the style of his debut with a more complex narrative and even creepier unnerving tone that makes this film one of the best horror films of the year. This is a film that relies solely on execution to sell its concept and the execution is so effective that it didn’t need the plot, characters, or anything else to do the work for it. The Blackcoat’s Daughter is one of those statement films that earns its merits in that manner.

Katherine (Shipka) and Rose (Boynton) are ready to head home on winter break, but circumstances leave them in the dorms of the private school for a couple days longer than expected. However, things are not what they seem and as soon as the majority of the students and faculty are gone, a monstrous entity makes itself known to the girls that will leave them fighting for their lives.

Oz Perkins simply knows how to craft a suffocating and unnerving atmosphere in his films. This is a love it or hate it kind of approach when it comes to horror films where even more consumable films like The Witch seemed to divide horror fans, so know that going into the film to expect it to be a slow burn and meticulously driven narrative that rarely tries to throw curve balls or shock tactics at the audience. Instead, The Blackcoat’s Daughter drives home one of those unnerving tones and a droning pulse of dread that makes up (and perhaps improves upon) the usual tactics one would utilize when talking about a supernatural monster stalking two young girls in a private school dorm over winter break. It spends a great deal of time just building up the small details and clues of its plot in the first half (if not for a majority of the film) with a leaping narrative of that doesn’t always make sense at first. There seems to be two plots going on at once and the connections, even by the end, are not defined and as apparent as a mainstream horror film would attempt to accomplish. Don’t let it lull you down though, the impact of the film is built in the audience piecing everything together and when those realizations come they are emotionally effective and well earned by the film. It just may not be the most exciting film getting there for those not willing to invest in the atmosphere and tone.

Of course, it helps when Perkins has a phenomenal set of actors to help out with the vague transitions and subtle detail building for the plot and narrative to rely on. The Blackcoat’s Daughter utilizes a minimal cast so every performance from the lead two girls in the dorms to the minor roles are all important and they are all executed in fantastic fashion. Having a seasoned veteran character actor like James Remar show up adds a bit of punch to the proceedings, but the entire ensemble works in conjunction with the tone and scripted vague elements to make for an unnerving and often suffocating atmosphere.

It’s not out of the realm of possibility that The Blackcoat’s Daughter splits its audience. The tone and atmospheric intent will inherently divide horror fans and create that love it or hate it rift. Oz Perkins handles it with impressive confidence and delivers one of the most unnerving films of the last ten years in the process. It’s vague with a very, very slow burn approach that may run against the grain for more casual horror fans, but invest in the details and let the feel of the film embrace you and this is a film that will linger far after the credits roll.