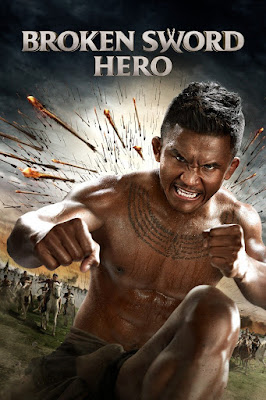 The martial arts quest film is one of the more popular formulas for the genre. Even if it comes as a part of the whole, having our heroes strive to learn more and better themselves through tests and challenges is a key part to the genre and one that fans usually celebrate with almost no regard to the actual quality of the quest itself. This is what makes the Thai period film Broken Sword Hero a rather fun twist on the usual tropes of the genre. It’s a quest film, certainly, but often times instead of just a series of montages showing growth or finding a single challenge they must overcome, Broken Sword Hero approaches it like a road trip film. There’s a destination and on the way our hero meets friends that become fellow travelers where they learn about themselves and the world around them as a vicious villain chases them down. It’s almost refreshing that the tone of the quest is different here and, in spite of some issues with the consistency of tone and some of the cheesier moments, it ends up being a highly enjoyable martial arts cinematic experience.

Like many of the Thai action films that have come out in recent years, it takes a special kind of understanding from the viewer to run with them. There’s often a blend of brutal action with drama and slapstick humor that all goes hand in hand and the entertainment aspect is always used first and foremost. Either the audience buys in or they are left behind as the film goes. Broken Sword Hero is the same in this regard. It’s presented at times as a much more epic period film about a legendary warrior, but the film has a lot more tones and genre shifting than just that. The road trip aspect of the plotting develops a lot of often humorous chemistry between characters, prominent and secondary ones, and there are moments of physical and wink-wink comedy that can be in stark contrast to the overall film focus. It’s not perfect in how it flows between them, not when compared to some of the greater Thai action films that have come out in the last handful of years, but it’s not overly distracting either for viewers used to the style.

Even with this in mind, Broken Sword Hero does a lot of things to be entertaining and, whether intentional or not, the humor and action work hand in hand to deliver us to that end. Buakaw Banchamek, portraying the titular hero, has a strong screen presence that carries a lot of the film even if his acting performance is occasionally shaky (a trait that should improve with time like it did for Tony Jaa.) He’s surrounded by a series of rather gimmicky, but fun, secondary characters that share quite a bit of chemistry with one another and the film gives him a cute romantic subplot to develop his character within his quest to be the best fighter in Thailand. At times these relationships are thin, the inclusion of a young Chinese woman from a theater troupe seems paper thin at best compared to some of the other fight focused relationships, but they work to keep the plot moving as our hero Thongdee goes from master to master to develop his skills.

At this point, it’s worthy to mention the action. It can be a tad repetitive since the film is about Thongdee training and fighting matches against other Thai fighters that comes off as similar throughout, but Broken Sword Hero does quite a bit to showcase the realism and hard hitting moves of Thai boxing to give it a solid action foundation. Outside of a handful of sequences that raise the action in a more dynamic manner, one where Thongdee fights off Burmese raiders on horses that results in him kicking a horse in the face highlights the film, Broken Sword Hero sticks to the brief and brutal fights. Don’t expect the highly complex choreographed fights or stylish battles that usually define a martial arts period film now and enjoy the film for its simplicity instead.

As mentioned, the humor is hit or miss and there are a handful of plotting points that are not developed as the film layers a more epic “hero origin” story. Broken Sword Hero progresses a kind of rivalry between Thongdee and the governor’s son in the film, but doesn’t necessarily wrap it up. It also feels the need to end the film on a substantially awkward note by trying to re-establish a familial bond for the hero and show us the reason for the title of the film when neither were necessary for the audience. This happens again and again as the film tries to pile in quite a bit of material into its run time and yet it still feels as though it’s meant to be the kick off of a much larger franchise – which I would be all for, mind you. It’s a slight issue ultimately, but when a film like this is entertaining as it is it’s hard to not give it some benefits of the doubt.

All in all, Broken Sword Hero is a mixed bag of material that has some problematic writing issues and can feel a little long and repetitive in the end. However, it’s also a film that cracks with charismatic moments, massively entertaining action set pieces, and an amusing road trip, buddy comedy approach to the usual martial arts quest foundational concept that delivers entertainment in fistfuls. Martial arts fans and those that enjoy the Thai action portion of that genre will definitely want to dig into Broken Sword Hero as it showcases the possible birth of a new superstar and a possible new franchise.