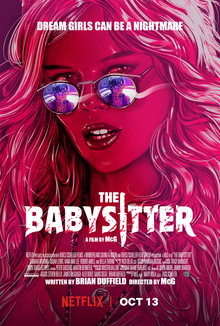 When The Babysitter was initially announced on the Netflix Original slate for October, I was intrigued by their commitment to horror comedies. First it was Little Evil, a surprisingly solid film in its own right, and then there was this one. Yet, the inclusion of McG in the director’s chair made me uncertain. Not that I inherently dislike McG, in fact I quite enjoy a chunk of his films, but he’s not necessarily known for his prowess in either the comedy or horror realms of film. It’s perhaps because of this that The Babysitter is so surprisingly fun and effective. It’s not the kind of film that’s going to be taking home awards or even go down as one of the best genre films of the year, but it’s a film that knows its quirks and embraces them rather spectacularly and in robust fashion.

Much of this comes down to how the film plays on its own tropes. The Babysitter blends the coming of age comedy, complete with bits of raunchy humor, outcast protagonists, misunderstandings, and plenty of pop culture punch lines, with the survival horror film and the blend, while certainly not original, feels inspired and energetic. It throws down handfuls of clichés, particularly in the use of its teenage villains intent on hunting down the charismatic protagonist, but it’s meta-understanding of the formulas and clichés makes for some fantastic jokes and the manner that McG uses stylish visual quirks and energy with the often heartfelt performances delivers some genuine laughs and gasps from its audience.

At times, The Babysitter does stumble a little in getting all of its jokes, scares, tension, and spins to work cohesively and it’s the bigger issue on hand with the film. Some of the set ups are a bit too obvious and there are a handful of subplots that feel underdeveloped including a bully and his goons that seems like their roles may have been edited down in rewrites or cuts as the film was being developed. Fortunately, the charm and energy of the film makes up for those in a lot of ways and keeps the entire film moving at a rather impressive pace that never fails to entertain and briskly punches its way through to the end.

At this point, Netflix is becoming a wonderful home for some surprisingly fun and effective films and The Babysitter is just one more for them to add to their repertoire for the year. McG delivers a massively fun and dynamically entertaining little horror comedy that fans will certainly be surprised by. Many of the silly jokes weirdly work and the manner that it plays up its tropes with its witty dialogue and spitfire delivery makes it one of those underdog films that deserves a bit of praise even if it doesn’t reach that next echelon of film material for the year.